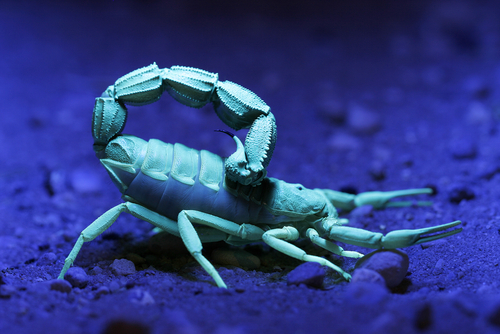 All scorpions fluoresce under ultraviolet light, such as an electric black light or natural moonlight. The blue-green glow comes from a substance found in the hyaline layer, a very thin but super tough coating in a part of the scorpion’s exoskeleton called the cuticle.

Scientists have noticed that, right after a scorpion molts, or sheds its shell, it doesn’t glow until the new cuticle hardens. According to scorpion expert Dr. Scott A. Stockwell, this could mean that the substance that causes fluorescence is a byproduct of the hardening process itself, or it might be secreted not long after the creature molts.

Whatever its source, the glowing property is surprisingly long-lasting. When scorpions are preserved in alcohol, the liquid itself sometimes glows under UV light. And the hyaline layer is amazingly durable: It can survive millions of years, Stockwell says; it’s often found in scorpion fossils even when all other parts of the cuticle have vanished. What’s more, even fossilized hyaline fluoresces!

• It protects scorpions from sunlight.

• It helps them find each other.

An article on the news website LiveScience reported another theory, by California State University arachnologist Carl Kloock. Because scorpions avoid sunlight in general and UV light in particular, he thinks the glow actually helps them figure out whether to come to the surface or stay underground, based on how much UV light shines on them. For example, these nocturnal creatures are less active on moonlit nights and during the full moon.

For humans, one benefit of the scorpion’s glow is that it makes these stingers easier to see in the dark. Which is perfect, whether you’re trying to study them … or avoid them! 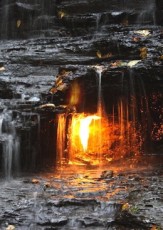 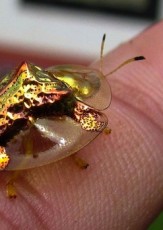 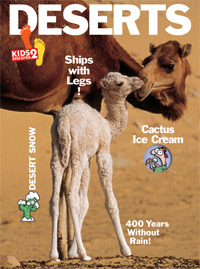