Nature Thought of it First 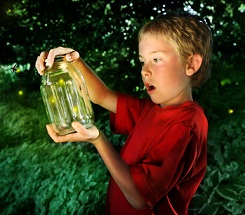 If you have kids, then you know how much they love things that glow in the dark.  I’m not a kid anymore, but I still love to go “oooooh” over self-lighting stuff.  It’s funny how the natural response to something that gives off just a little light in the darkness is one of wonder and curiosity, or even a soothing sense of calm.  If you’ve never indulged in a glow stick, or glow-in-the-dark necklaces and bracelets, I highly recommend them.  Although the heatless light given off by these novelties comes from a chemical reaction, called chemiluminescence, they’re a great device for teaching your kids about natural bioluminescence – the natural light caused by living things.  Mother nature has been putting on light shows after dark, and in the dark places of the world, for a very long time.  You’d be surprised how many different organisms produce natural light. Some of them you may even venture to find on a summer night with your kids in tow.

Fireflies – these aren’t actually flies, but a member of the beetle family.  They live in tropical and subtropical climates and are often active during the warmest months.  Scientists believe that the glowing bellies of these beetles are meant to attract mates.  Many species of fireflies can be found in North America, Europe, South and Southeast Asia.  You may already be quite familiar with these beloved harbingers of warm summer nights, but did you know that several species of fireflies can synchronize their flashing glow amongst hundreds of specimens in a single area?  I’ve never seen it myself, but it is said to be a sight to behold.  The light colors on most fireflies range from green, to yellow, and some even have red spots.

Firefly Squid – commonly found living in the deep sea off the coast of Japan, these small squid congregate in very large schools and may be found near the sea surface hunting at night.  Their bodies are covered with photophores – light emitting organs – that glow blue.  Many thousands of them together can make the ocean alive with brilliant blue light.  Japanese fishing boats that harvest these squid from March to June are said to allow spectators along for the ride just to witness the spectacle.

Glowing Mushrooms – so far scientists have identified over 60 different species of luminescent mushrooms around the world, but the most intensely glowing and spectacular specimens have been found in Costa Rica and the Brazilian rainforest.  These mushrooms glow green and are so bright they can be used to guide your footsteps through the jungle at night.  Scientists aren’t sure why mushrooms have developed the ability to glow in the dark, but it may be to attract insects that will help to spread the mushroom’s spores.  There are some species of glowing mushrooms found in North America and Europe, but finding them requires hiking through forest at night.

Dinoflagellates – if you live near the coast then make sure to take the kids out for a trek on a warm summer night to see the sparkling sea.  Dinoflagellates are a microscopic organism found in huge numbers living in oceans around the world, as well as in some fresh water.  They give off a characteristics blue-green light when agitated.  Seeing them sometimes is as simple as standing on a dimly lit dock at night and watching the water lapping at the pier pilings, or breaking waves.  You can even try scooping up a jar of water and disturbing it with your fingers to make the ‘green sparkles’.  Scientists believe the glow the dinoflagellates give off is defensive in nature; to either scare off potential predators, or to light them up in the dark and make them think twice about hanging around the light.

Milky seas – ancient mariners logged reports of strange milky seas that seemed to span in every direction, as far as the eye could see.  For many, many years scientists were skeptical that this phenomenon existed until one witnessed it first-hand.  Said to be some of the largest and most spectacular natural light shows on earth (so bright they’ve been filmed from space via satellite), they are caused by incredibly dense clouds of bioluminescent bacteria.  No one’s really sure how such enormous populations of glowing bacteria come together, or why they glow continuously.  Unlike dinoflagellates, which require manual agitation to stimulate their glow, these bacteria seem to emit continuous light for many hours, or days at a time.  Some of the milky seas that have occurred are estimated to cover as much as 6,000 square miles.

Bioluminescent bacteria also make it into the bodies of many sea creatures that end up on our tables. Some people have reported seeing shrimp, or imitation crabmeat, that glowed in the dark.  Those would be fairly easy for you to obtain at just about any supermarket and could be a fun experiment with your kids.  If you have a microscope at home, then try making a slide of the glowing bacteria you see on your seafood salad!