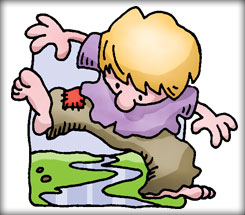 I’m asked this question a lot. The moniker for my website is Dogfoose.com, and before you feel the need to ask, no, it’s not a word. Not a real one anyway. Whenever I chance to search for it on any one of a number of search engines, my motives (and ability to spell correctly) are quickly brought into question. “Did you mean ‘dog food?’” Thanks anyway Google.

Perhaps a bit of history will help.

When my older brother and I were much younger, roughly (insert large number here) years ago, we had a penchant for doing everything and anything that had to do with the outdoors. Whether it was camping out in the backyard, or playing soldiers, or hide and seek, or something to do with astronauts, we were always outside. Spring and Summer and Fall were optimum seasons for our out-of-the-house adventures, but Winter would not necessarily keep us from our appointed rounds.

Geography never seemed to get in our way either. We could be in the tree behind our house one minute, and up to a mile or more away the next—given the average life expectancy of a Schwinn Stingray bicycle tire of course. The clock on the kitchen wall seemed to be a mere suggestion to us. We knew that darkness would always come, and with it the pressing need for us to get as far from our mother’s voice as possible. I quote: “Get in here right NOW!” The strangely-needlepointed 12-months-of-songbirds calendar we held in a similar light, with the only reference point coming every 7 days or so when we were ceremoniously scrubbed and dragged to church.

Rules? That’s a funny word. The only rule we ever had for our games is that we had no rules. As previously described, we had no set time limit, no natural boundary, no predetermined cause or result, and of course, no “rules.” We played with anything and anyone that came along (members would often drop in and out of the process due to the vagaries of dinner times and the insistence of doting parents that ‘time is up,’ which is nonsense!). Participants could wear any uniform, speak any language, and were encouraged to change the thrust and location of the game at any moment (letting others in on the change was optional as well). Equipment could include chairs, blankets, sticks, any and all of mom’s silverware, wheels, hoses, ropes, and of course the occasional piece or two of otherwise discarded lumber (which held the vast potential of a new, if somewhat unsturdy treehouse). The only real requirement? A vast imagination.

On the odd chance that our mother was able to corner us long enough to ask what we were doing, she was always beset with a rambling, often 15-20 minute, very loose description of what had transpired within the last day or so. After several of these verbal encounters, and at a complete loss to explain her children’s activities to her women’s sorority group, she simply began referring to it as “dogfoose,” a completely made-up word to cover a made-up game.

After that, our conversations would go something like “Have you boys been out playing dogfoose?”

Conversation over, and precious minutes saved accounting for our actions; minutes that could otherwise be spent in a cardboard fort, defending it from aliens (girls).

I came across a somewhat contemporary version of dogfoose several years ago whilst perusing Bill Watterson’s Calvin and Hobbes, in which Calvin and his stuffed companion Hobbes would engage in CalvinBall. Of course, to imply that a ball was to be part of any of our games was a heretical notion. In the event that any kind of spherical, leathery object was involved, it was most likely brought to the fray by one of our more well-heeled contemporaries (e.g., some kid whose parents had actual money), and could be summarily yanked from the action at the drop of a disputed hat. “Take your lousy ball. We’ll just use a dirt clod.”

For the concerned parent, as expected, there was typically no shortage of scraped knees, bloodied elbows, cut fingers, or bruised egos resulting from a game of dogfoose, but repairs were simple and quick, and it was on to the next round. It was also a time and a place when–if our parents knew that we were anywhere within a mile or so of our house–we were safe. All of the neighbors looked out for each other’s children, and we always knew that we were being watched out for.

The game for which my website is named was one of imagination and wonder; totally lived in the moment, and always changing. So, do you allow your children those “dogfoose” moments? Is there a game they are good at that defies description? If so, perhaps it’s time make up your own word. Google tells me that fundlegoob isn’t taken…