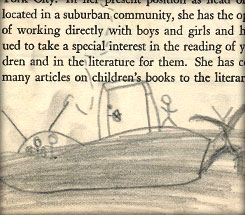 When I was little, it seemed that I had a penchant for blank pages. Along with an overwhelming desire to draw on anything that would stand still long enough, I also became quite taken with, ummm, pages that were not so blank.

To be specific, my parents felt that my siblings and I were always in need of some literary refinement, and on one occasion had purchased a gently used set of The Junior Classics by Collier Publishing for us to digest. I believe there were 10 books in all that ranged from Fairy Tales and Fables to the Poetry Reading Guide, with stories about animals, stories from history, and so on scattered in between. Being an early adopter type, I dove into book one and quickly realized that—although there were many color illustrations as well as monochromatic images—something was missing. I sought out the nearest pencil and began to festoon the spaces between paragraphs as well as the margins with sumptuous illustrations of my own.

This non-commissioned artwork did not seem to meet muster with my mother, and I was summarily reprimanded and sent to the corner of the room (where I began to imagine the walls with decorative flourishes of dinosaurs and P-51 Mustangs, engaged in a battle for earth). To be honest, the incident halted my artistic process temporarily, but certainly not for good. I would soon become the recipient of every kind art supply, drawing tablet, and box of oil pastels on the market during any and all birthdays, Christmases, and feel-good trips to the local five-and-dime (we did not have Walmarts then).

It might not surprise you to learn that those original story books (yes, there were more than one) that I felt compelled to illuminate still exist. I have several in my office, and my mom wastes no time in showing her collection to people who’ve not yet asked to see them. Moms are like that I guess.

Those books went from being something that existed for me and my siblings in the short term, to something terribly precious; all because of a few scribblings. Borrowing on this oddity, I began to find places for my own children to “take ownership” as it were.

My wife and I built a home around 1984 or so, and several years later were in the process of finishing the basement (electrical, drywall, etc.) when I had a thought. I asked my two sons to join me downstairs for an art festival. They were to draw anything on the bare concrete walls that they could imagine, with the knowledge that those walls would soon be covered of course. But that reality did not deter them.

Teenage Mutant Ninja Turtles, Calvin and Hobbes, X-Men, jets, monsters, aliens… all were fit subjects for this onslaught of imagery. Mediums of choice ranged from sidewalk chalk, Magic Markers and crayons, to leftover latex paint. When the dust cleared, we had several basement walls absolutely covered with time-honored illustrations.

Check with your local recycling center (free–best choice), Thrift store, or even your local library and ask if they have used books offered for next to nothing. Avoid the classics as they are typically read and reread before losing their luster, but find something fairly easy for the kids to read (if they choose–and they will). Then hand over the drawing pens, crayons, and markers with the instructions to “Go for it.” Encourage your young artists to decorate the covers and the spines of the books too, which will give them that “Shelf Awareness.” Now is also a good time to give them a stern caution. “You can draw in this book, and this book only, if you have permission.”

But don’t stop at books. Do you have anything lying around the house that has met its useful end? How about an old laptop (mine is covered with doodles) or musical instrument? Clock radio, stereo, kitchen chair, desk, sneakers? How about a VCR? (I know you have one.) And don’t worry about it being black and difficult to draw on. Presto™ Jumbo Correction pens are the defacto standard for artists working in white.

Want to think bigger? I once heard of a man who handed over the paint job on his dilapidated, white 1983 Ford Fiesta to his children and their magic markers. When the time eventually came to “recycle” the car, one of the kids stepped in and took ownership of the vehicle.

Looking back, those basement walls were eventually covered, and the room turned over to grownups with TVs and sound systems. But the art, the art is still there.

So what kinds of things can you find to let your kids take ownership of? Which also begs the question, how precious is something, and what makes it so? There is no doubt that had I not scribbled in those books so many years ago, they would have found their way to the bottom of a landfill, a paper recycling company, or at best, a thrift store. At the moment, they are still on the shelf. Food for thought.

Now I must go. I’m pretty sure that Mom has a coffee table sorely in need of “decoration.”