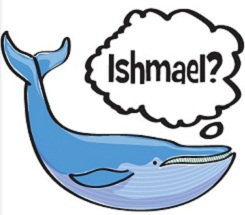 “Call me Ishmael.” Whenever I hear that line, I imagine that one of Ishmael’s friends–most likely Queequeg–is reminding the main character in Moby Dick that they need to do lunch soon, and that he should call him.

Of course, Herman Melville would be rolling in his lifeboat to hear me take such liberties with his seminal classic of discovery and voyage, but that’s just who I am. I believe that there is a different way to look at (and listen to) everything.

Have you ever read the dictionary? I mean actually read it? It starts off strong enough with the aardvarks and the abaci (plural of abacus), maintains a good flow through the G’s, H’s, and I’s, but then the story kind of drops off when it gets to the Q’s (the writing is short, hard to pronounce, and largely qualmish; ha ha). Not to worry though. It gets strong once again with a flourish of R and S words then leaves us wanting more with one of the smallest characters, the zygote.

The X section is troubling for sure, and was likely included because of the strength of the Xmas lobby. And what is up with the W chapter? All established cred aside, I have a problem with the letter W in general. First, It’s not a double U, it’s a double V. Second, it’s the only letter in the English language that does not use itself in its own pronunciation (that would sound like double woo). Thirdly, it is the only multi-syllable letter–the rest are one syllable–making us pause just to pronounce it, the most egregious example of this being every address of our beloved internet. Visually, www is only three letters, but requires nine syllables to spit it out. Vhat a vaste of time!

Where was I going with this? Oh yeah, the dictionary as a plausible story. Now, I know what you’re thinking. (The author of this blog has been spending too much time drinking water from a questionable well, right? That may well be, but read on.)

The dictionary is in simplest terms an alphabetical listing of common words and their meanings, not a literary tour de force. That is, unless you approach it one word at a time, with a purely phonetic philosophy, and a burning desire to redefine most of the words we use.

Try this with your kids sometime. Grab a dictionary (the paperback version is the most convenient as the Webster’s Unabridged version can weigh in upwards of fifteen pounds), plan to meet with the young ones on the front porch, the kitchen table, or anywhere else far from the maddening television or computer, and maybe include a tablet for documenting the “gems” you are about to uncover.

Unlike most novels, you can start anywhere in the dictionary, so just flip open a page and point. But here’s the trick: Think phonetically. And don’t concern yourself with the tried-and-true definition, but just listen, and be prepared. As in…

Barrier: When someone or something has more berries. (berry-er)

Cement: When you go to a place that makes coins. (see mint)

Emulate: What the L and the N said when the M didn’t show up on time. (M, you late)

History: Not to be confused with her story (his story)

I could go on with these for many pages, but I think you get the gist of it. Many evenings I can be spotted on my front porch with a dictionary, laughing out loud at some of the definitions floating through my otherwise empty head; all the while watching the neighbors hurriedly packing their U-Hauls and rueing the day they decided to buy a house next door to the artist/blogger known as Mikey.

And there is no real definition (ha) for this game. It falls under the category of puns (paronomasia), wordplay, spoonerisms, idioms, or any other type of intentionally misused words or pronunciations. A good place to begin this kind of word disembowelment would be to find a copy (online or otherwise) of Howard L. Chace’s Anguish Languish, and set yourself (along with your offspring) on a course to some wonderful phonetic fun. While you’re at it, pick up the board game Mad Gab and give it a go. (Hint: The listeners do much better at this game than the watchers.)

As with all ways to have fun with your kids, allow them the chance for self expression, and listen to their ideas. The best games are the ones that come naturally, and those will be the games they remember best.

Ending: What you get when someone hits your rear bumper. (end ding)