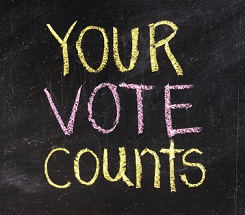 Recently, a friend who works for the California Office of State Publishing invited me and my daughters to see the printing of the voter information guide for the upcoming election. During a discussion on the way to the printing press, I realized my girls did not know what a Voter Information Guide was or much about the election itself.

I myself find the election process quite complex and even daunting, so I can understand why my kids would too. But if you break down the process to the main components, it actually is not too difficult to grasp. Also, a great election discussion can get your kids interested and excited about what’s at stake in the coming election and hopefully committed to someday becoming dedicated – and educated — voters themselves.

First things first, explain to your kids why our right to vote and our act of voting are both so important. Why do we vote? What difference does it make? Bring up examples of past elections that had narrow margins, demonstrating how every vote does count and how it’s crucial as an individual and group to be heard. Discuss also how elected officials and laws impact what decisions will be made — and perhaps how they’ll affect them personally (e.g., at school, parks, libraries).

Also, what did others endure so we could have this right? It will probably be difficult for young kids to understand, but let them know that in the early days of this country, not all people were allowed to vote. You may want to also compare the U.S. to other countries that still do not allow a voting process to take place at all or allow all citizens to vote.

So, starting from the beginning, I explained to my girls that there is an election for president and the vice-president every four years and what the qualifications are to hold these offices – basic information such as having to be at least 35 years old, a U.S. citizen and a resident of U.S. for at least 14 years. Then there are the parties: There are the two main parties, of course, in addition to third parties such as the Libertarian Party, Independence Party and Green Party.

There’s the campaigning, then come the primaries and caucuses to vote who will represent parties at the general election. Then the national conventions to announce who will be the presidential candidates (even though everyone knows at this point anyway). I let my girls watch and listen to some of the speeches at the national conventions. To be honest, I think to them, it all looked like a big show with a red, white and blue color scheme. But despite the outward appearance, I tried to explain to them that the purpose of these conventions is to get folks revved up about their candidates and boost their popularity.

Then election day, which is always the first Tuesday after the first Monday in November during election year, is upon us. I remember as a child being pretty surprised to find out that U.S. presidents are actually not directly elected by the voters. Rather, it’s the electors from each individual state that cast ballots in the electoral college. Wow! Your kids will likely be surprised to hear this as well.

In addition, discuss how the process involves not just the presidential and vice-presidential election, but also ballot measures and state propositions. Explain how results will affect them at local and state levels.

Bringing It All Home

An exercise that may help further your kids’ understanding of the election process and its importance is holding an election at home. Pick something that your family can vote on; for example, as where will you go camping, what movie should you go see or what color do you want to paint their bedroom. Kids can give speeches and posters, make ballots and a ballot box and then announce the outcome of the election.

Despite the convenience of the absentee ballot, be sure to bring your child to the polls with you on election day. You and your children can wear your “I Voted” stickers, getting the message across to them and other young ones that voting is a privilege and something to be proud of.

Whether your favored candidate wins or not, let your child know how important the general election process is and express your appreciation for our right and privilege to vote. Unfortunately, today’s young people are one of the smallest demographic of voters. We parents can change that by ensuring our kids know that the only way to get heard is to be heard.

PBSKids.org: Zoom Out the Vote!: http://pbskids.org/zoom/fromyou/elections/elections101.html

Congress for Kids: The Election of the President: http://www.congressforkids.net/Elections_electionpres.htm