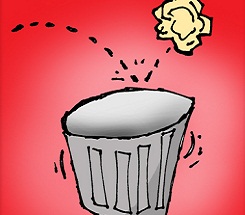 I’m guessing that by now, the Christmas season has already begun in earnest. The container ships have answered the call of the wild retailers and have unloaded their electronic and plastic flotsam at ports around the country, and it is well on its way to your favorite consumer shelves and e-shelves. Advertising and marketing gurus are huddled around the warm light of a computer screen, either nodding in agreement or rolling their eyes over the latest form of e-commerce. Catalog producers are absolutely giddy over the soon-to-be torrent of purchasable items in print, and the Salvation Army is dutifully tuning up and polishing their bells (I refer to it as wrap music).

And this is all well and good. Though a great deal of our discretionary income vacates our wallets–like mice pouring from a room full of cats–around this time of year, all the major producers of consumable goods point to the holiday season as a make it or break it sign of the economic times. Not a bad sign. Many of our neighbors and friends (if not ourselves) are gainfully employed at these centers of commerce.

Certainly tradition falls upon us this time of year like no other. The overeating, the incessant holiday music, the I-can-beat-you-this-year displays that seem to know no chronological order, and the ubiquitous (that means everywhere) scenes of tiny tots gathered under the tree, displaying the subtleties of caffeine and sugar induced volcanoes; all clear signs that December the 25th is upon us.

But how necessary is it? I remember waking earlier than usual, chomping at the bit to tear into my presents, and I tried to give my children the same memories, only… life stepped in.

My first wife (here’s a clue) and I were married in 1980, begat two wonderful boys, and summarily divorced in 1992. Given the ensuing legal ramifications, for a time I was honestly and quite matter-of-factly broke. Presents beneath a bedazzled Fraser fir were no longer guaranteed (neither was the fir actually), and at best, their numbers and size would be down sharply. But that’s when things got interesting, and not in a bad way.

We managed through our first holiday season by focusing on preparing food (for ourselves and our family) as opposed to spending time at the mall. With Christmas in our wake, we then set our sights on other ways to have more fun with less cash. We carefully prepared nearly a hundred pieces of wadded-up paper and a small trash can for a game of trashketball (extra points being allowed for no-lookie shots, banking off the TV, and behind-the-back ringers).

When the warmer weather set in, we made a point of finding things to do outdoors; the only criteria being that it had to be basically free or made from existing parts. We would spend countless hours upon the sandbars of the local river (the Arkansas), attempting to divert the flow with kitchen spoons, tree limbs, and the occasional rock; all in vain of course. The local parks found us in their trees, climbing from limb to limb, stopping only to assess the design, value, and likeliness of a 1,200 square-foot treemansion.

Perhaps the most fun we ever had involved a baseball bat, an out-of-the-way field of Osage Orange trees (used widely in the Midwest as hedges), and a few spherical delights known as hedge apples (the fruits of those trees). One fielder, one pitcher, and one batter. The fielder’s job was pretty much just to laugh at the goings on while he waited his turn; the pitcher’s job was to pitch then try and duck the flying bits of fruity goodness; and the batter’s job was to send one of the orbs sailing with a direct hit, which actually only resulted in blowing the thing into a thousand tiny bits, and covering said batter with a unique yellow-green slime. We never planned to repopulate the state of Kansas with Osage Orange trees (though I’m sure we helped), we were just there to have fun. And that’s my point…

Though they have both outgrown their father by a considerable distance (some say in maturity as well, a claim I will not dispute), if you were to ask either of my two sons what they thought of Disney World, or the big trip to Colorado, or their original X-Box, they might be able to muster a few tidbits. But ask them about trashketball, river routing, tree climbing, or hedge-apple baseball, and you will receive a smiling, eerily accurate–and often embellished–step-by-step account of every one of those events.

In short, these were things I could not buy nor put under any tree. They were, and continue to be, the best memories ever. And for the record, I am remarried now, to a very compassionate and understanding person. She and my boys fit like glue, and we have the option to put “stuff” under the tree now if we wish. If we wish.

Spend time with your kids. It’s the greatest gift you can give them, and I guarantee they will remember it long after the shine is gone from the latest video game.

And while we’re on the subject, you’re not throwing out that empty cardboard box, are you?