Let’s Do This: Overcoming the Math Obstacle 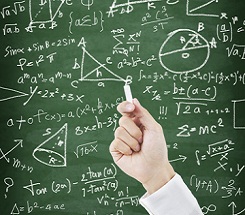 I’m not going to sugarcoat it.  To actively participate in science requires competence in math.

Before you throw up your hands in despair, shrugging off the very idea because your child is struggling in math, don’t close the door on them just yet.  Your child is in good company.  Unfortunately, for many kids and adults alike, math fluency has become an insurmountable obstacle on the path to doing science.  In fact, the subject of math in school drives many kids who otherwise like science, away from it because of frustration.  Success in math education is a critical foundation for building future competence in science and engineering, but not everyone agrees on how to tackle the problem of American students underperforming in math (compared to their peers in Finland and Japan).  If our schools are failing so many of our kids, then what can parents do to make sure their children’s futures don’t get ‘lost in the wash’?

Firstly, let me gently remove part of the blame from our education system and put the spotlight on our popular culture.  We can’t overlook one of the biggest social hurdles to competence in math – in popular culture, especially in the U.S., it seems that it’s cool to be “stoopid”.  This race to the bottom appears everywhere, particularly in television programming, song lyrics, and sound bytes from celebrities and even politicians.  People who struggle with math and science are artificially buoyed by what appears to be the general attitude that it’s O.K. to be ‘dumb at math’ when they are continually bombarded with messages from popular media that reinforces the message.  This generally accepted attitude can sabotage your child’s desire to persist with math studies if they grow frustrated with it.  It’s too easy to shrug it off when they see that so many other people have, too.

As a parent, you are the first line of defense against this kind of self-defeating thinking.  You may find that you have little control over the curriculum in your child’s school, but what you DO have some control over is the attitude your children assume when they begin learning math.  You have the ability to override the mass media message and to impress upon your children that there really aren’t two kinds of people; those who can do math and those who can’t.  Instead of identifying themselves as either a math whiz or a math dope, remind them that it’s a continuum where some people find it really easy, while others have to work harder at it.  Just because it doesn’t come easily to some people, doesn’t mean they’ll never be able to learn it.  My fifth grade daughter struggles with math, but I won’t let her be defeated by the subject.  My daughter LOVES astronomy and dreams of growing up to be a scientist.  I will continue to nurture her love for astronomy, while providing guidance, assurance, and outside assistance, if necessary, to keep her math studies on track.

Tell your children that math is important, show them that you use it every day, and tell them you believe they are smart enough to learn it.

Acknowledge that your child may find math frustrating sometimes, but remind them they are not alone.  I’m a scientist and I can’t tell you how many times I was frustrated with math, particularly the more advanced math and calculus I had to take in college.   There are plenty of working scientists and engineers who had to work at learning math, but they didn’t let it defeat them.  I love the anecdote about how Albert Einstein left school at the age of 15 because he clashed with authorities and resented the school’s regimen and teaching method. He later wrote that the spirit of learning and creative thought were lost in strict rote learning.  Einstein hated his math studies at school, but he still turned out to be pretty brilliant at science!

Here are some great ways to encourage math smarts and confidence in your kids from a young age:

* If you know how to bake, bring your young children in the kitchen with you when you do.  Have your children help you calculate and measure the ingredients. Doubling and tripling cookie recipes is a fantastic way to learn fractions in a real-world context that makes sense and is good fun.

* Give your children an allowance, or have them earn real money for jobs they do around the house.  Give them the money and have them count it.  Let them use their money to purchase things outside in the real world and have them handle the transaction.  Learning to manage and spend money is a great way to show them that math is something we use every day.

* Have your child help plan for their birthday party.  There’s plenty of math exercises in planning for the number of invitations, how much food, how big of a birthday cake, how many party hats, etc.

There are endless possibilities for fun hobbies and pastimes that can include using math skills (does your child collect seashells, beads, rocks, coins, dolls, or cars?)  Sitting down with your child in a positive, relaxed setting and making a game of counting and sorting with real objects helps them feel comfortable with numbers and teaches them that math can sometimes be fun.