Greenbacks and Nickels and Kids (Oh my!) 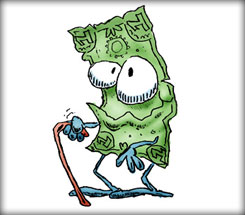 Dorothy had it easy. Sure, she had a perilous journey to see the wizard, then had to trek to the witch’s castle in order to secure some outdated sweeping device (she could have picked up a Swiffer at the Emerald City Walmart for a lot less trouble), then had to hike back to the city again, only to learn that the “wizard” was just some guy with a fascination for pyrotechnics. But the one thing she didn’t have was the Lion and the Scarecrow and the Tin Man always begging her for money during the whole trip, to buy apples or oil cans or Flying Monkey trading cards, or any one of many trinkets of capitalism available along most any color of brick road, which made the trip a bit less stressful.

And that is where Dorothy is likely quite different from you. Do you give your kids an allowance? Do they understand what a budget is? Do they actually save some of their money? Do you? With the country just beginning its slow and hopefully upward journey from a deep recession, there is probably not a better time to have a discussion with your munchkins on the how, what, where, and why of all things money. So let’s walk our way through a few of the obvious talking points and how to approach them.

“Kelsey’s family has more money than we do.”

Unless you live under a rock and holeschool your children (like homeschool, only deeper underground), the differences between the “haves” and the “have-not-so-muches” are usually the first signs of capitalism at work that children will notice. The neighbor Nathan has a brand-new tricked-out BMX bike with LEDs, or Britney (from the 3rd grade) has amassed a collection of Barbies the size of the Roman Colosseum. Talk with your kids about the differences in wages, job functions, and even lifestyle choices that can make a difference in how money within the family is accrued or distributed.

A critical part of any family discussion involving finances is to have a singular message. Talk first with your partner about the best way to approach a “money meeting” with the kids, which often benefits the talkers as well as the talkees. For as sweet and naive as most children are, they will sense any disparity in your message, and jump upon the opportunity to divide and conquer faster than a Hammerhead shark at an all-you-can-eat herring buffet. Be consistent, be clear, and keep in mind that it’s best for kids to hear about money from you rather than someone else (who does not understand your financial situation).

If one of your offspring has already asked for something at the grocery store, then you’ve put off having “the talk” too long. Coins and bills are tangible items that can be held, counted, and traded, and even the youngest of children will understand the concept. Give them a “store allowance” before you begin shopping, and stick to your guns. Teach the little ones how to make a smart buy, and have them by your side at the checkout stand as well as the desk when it comes time to pay the bills. Many parents will establish a weekly allowance that gives kids a chance to budget for places other than the grocery store. Should they question the amount of the allowance, it’s a great time to sneak in something about bartering. “Would you be willing to empty the dishwasher once a day?” After all, if it works for Donald Trump… no, wait. That’s a bad reference. Anyway…

This classic plea of Oliver Twist for just a bit more gruel can set the stage (pun) for an important aspect of children and their money, and that is charitable giving. Explain to your kids what charity is, how it works, and that it doesn’t always mean that the gift needs to be one of coinage. Share with your kids ways that you are philanthropic, and point out such famous givers as Bill and Melinda Gates, Warren Buffet, Oprah, and Alfred Nobel (of the Nobel Prizes), who sought a better legacy after his death than that of Inventor of dynamite (a useful but somewhat murderous chemical compound).

“Don’t worry, everything is fine.”

Be straight with your young spenders. When times are rough, tell them that some things may change and that some belt-tightening is in order. Conversely, share your successes with them as well. Dinner is usually a good time to discuss the daily dispensation of dough (not the Pillsbury kind), and if your kids are engaged in eating, they are more likely to talk to you than they would be with an iPad in hand.

“When in the course of human events, it becomes necessary…”

Write it down. This is a pretty simple but often overlooked exercise that your children need to adopt. Money is numbers and numbers don’t lie. Make a simple ledger, whether it’s for savings or cash flow, and let the little ones help. When it’s in black and white there’s no denying it.

If you teach your children how to handle their finances at an early age, chances are you’ll be much more confident when someday they will be asked to help you with yours. And let’s hear nothing more about Flying Monkey trading cards…