Kids Acting Out – On Stage 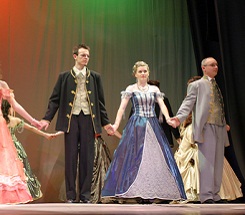 Recently, my girls have caught the theater bug. Not sure where they caught it from – maybe it’s the influence of the Disney channel, or perhaps the various theater productions they’ve attended over the years. So when they found out that a young actors theater group at their school was inviting students to participate in a musical, they jumped at the chance. Then to my surprise, they both wanted to audition for main roles.

For a person like me who has a tremendous fear of public speaking, I’m pretty amazed and proud of my kids – and the other kids – for having the guts to perform in front of an audience. They’ve been rehearsing for weeks, and so far, I see that the experience has been nothing but positive for all the students. Not only are they having a great time participating in a production and gaining performing arts experience and knowledge, but they’re also gaining a huge boost of self-confidence in the meantime.

Despite the fact that the arts are often considered “non-academic”, arts and academics are actually closely connected. Kids who participate in theater have been shown to be better readers and also increase their math skills. According to the American Alliance for Theatre & Education, students involved in theater seem to score significantly more on their SAT scores, as well as “maintain better attendance records and stay generally more engaged in school than non-arts counterparts.”

In addition to the academic gains, performing serves as a terrific catalyst for free expression and creativity. At times, school curriculums require students to fit a particular profile to succeed; however, theater is different. It allows kids’ individual personalities to unfold and lets them reach into different aspects of themselves. They can freely express their happiness, fears and even anger in a productive, satisfying way.

One of the things I love when I take my kids to theater is showing how the actors must use their imaginations and creativity to tell a story. Unlike TV or movies, in which much is explained and overt, theater requires more. For instance, performers may have to imagine and act as if they’re on a cold, snowy mountaintop. This has to be conveyed through sets, props, gestures, voice, etc. – and the audience has to buy into it as well. Also, theater is live, of course, so when mistakes happen, scenes cannot be redone over and over again during the performance, unlike in television or film. It’s great for kids to see the imperfections, and yet the show must go on.

Working on a production together is also a significant teamwork experience. Everyone – director, actors, stagehands, set-makers, costume creators, etc. — is making a contribution to the end-product. Also, each is depending on the others for help, and without one or the other, the production comes up short.

One of the greatest pluses of doing theater is how it can raise a child’s confidence level. Speaking and performing in front of an audience, especially over and over again, provides a level of comfort with public speaking. Your child learns about projecting their voice, making eye contact, memorizing lines and simply realizing that speaking and/or performing on stage isn’t such a scary thing. They may be more likely to realize their potentials and even be more inclined to take on leadership roles at school, in sports, and in other extracurricular activities.

If your child has no interest in performing on stage, there are many other ways to get involved with theater that are just as rewarding. They can write their own scripts and direct a play with their friends. Your child can also volunteer to help create sets or costumes – both great exercises in creativity that are very important parts in a play’s success. Another suggestion is to help backstage, with lights, music, costume management or scripts. They’ll enjoy working productively with others and also gaining valuable experience and knowledge about theater and stage production.

Between my two daughters who auditioned, one received a more plum role than the other. So needless to say, despite still having a role in the play, one child was a bit disappointed. But in the end, the process and the rejection actually has been a great life lesson. As we adults are keenly aware, there are plenty rejections in life. So in addition to the “there are no small roles, only small actors” pep talk, I’ve encouraged my daughter to review and examine what she may improve on for next time – then, of course, get right back up on stage and try, try again.