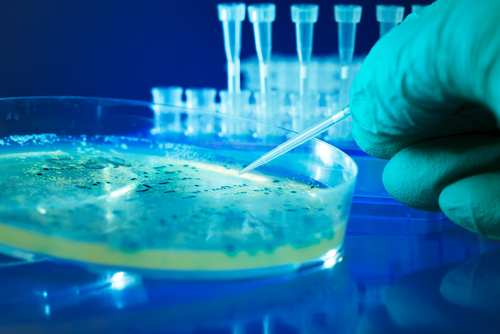 As the sun went down after the 1862 Battle of Shiloh during the Civil War, some soldiers noticed that their wounds were glowing a faint blue. Many men waited on the rainy, muddy Tennessee battlefield for two days that April, until medics could treat them. Once they were taken to field hospitals, the troops with glowing wounds were more likely to survive their injuries — and to get better faster. Thus the mysterious blue light was dubbed “Angel’s Glow.”

In 2001, 17-year-old Civil War buff Bill Martin visited the Shiloh battlefield with his family and heard the legend of Angel’s Glow. His mom, Phyllis, happened to be a microbiologist who studied a soil bacterium called Photorhabdus luminescens or P. luminescens — which is bioluminescent, meaning it gives off its own light. In fact, it gave off a light that was pale blue in color.

Bill and his friend Jonathan Curtis wondered if this organism could be the source of Angel’s Glow. Bill’s mom encouraged them to try to find out.

The boys learned that P. luminescens live inside nematodes, tiny parasitic worms that burrow into insect larvae in the soil or on plants. Once rooted in the larvae, the nematodes vomit up the bacteria, which release chemicals that kill the host larvae and any other microorganisms living inside them.

Bill and Jonathan were slightly stumped to find out that P. luminescens can’t survive at normal human body temperature. But they figured out that sitting on the cold, wet ground for two days had lowered the wounded soldiers’ body temperature. So when the nematodes from the muddy soil got into the wounds, the bacteria had the right environment to thrive — and to save the men’s lives by cleaning out other, more dangerous germs.