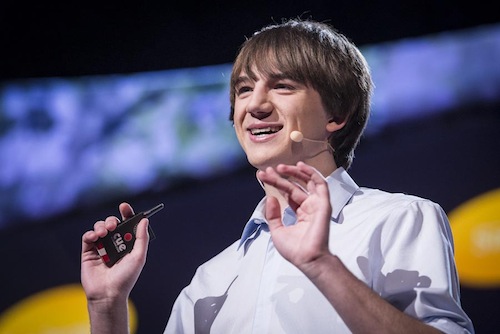 In 2011, Jack Andraka’s uncle died of pancreatic cancer, a particularly deadly disease. In 2012, the 15-year-old invented a paper test strip that gives doctors a way to detect pancreatic cancer much earlier, giving patients like his uncle a better chance of surviving.

This type of cancer is usually fatal because the pancreas is deep inside the abdomen, so tumors may not show up until they’ve grown big. However, high levels of a protein called mesothelin in a person’s blood can be a clue that the tumors exist. But until the Maryland teen’s invention, there was no quick, inexpensive way to test for mesothelin.

Jack’s test strips accurately detect unusual levels of mesothelin in the blood long before the cancer becomes life-threatening. He used filter paper coated with microscopic tubes of carbon just a single atom thick. Antibodies on the tubes attract mesothelin, spreading the tubes apart. As more protein piles up, the carbon’s resistance to the flow of electricity drops. This decrease can be measured, revealing the presence of the mesothelin.

Jack’s method is much faster and more sensitive — and way cheaper — than the standard diagnostic technique known as ELISA, or enzyme-linked immunosorbent assay. His discovery won the 2012 Intel International Science and Engineering Fair, the world’s largest international science fair for pre-college-age kids.

But it wasn’t easy for Jack, who’s loved science since he was a toddler, to convince adult researchers that his idea was worth a shot. He was rejected by 200 scientists in his quest to find someone to let him work on his project in an existing lab! Finally, a scientist at Johns Hopkins University listened, and gave him space to make his idea real. Jack predicts his test will replace the ELISA in just a few years. Who knows what else he’ll have invented by then?