Castles can seem like fairytale places, where princes and princesses danced, where lords and ladies feasted, and where honorable knights jousted for prizes. But the truth is most castles were built for battle. They saw as much of war and treachery as they did of court jesters and pageantry.

Castles date from the Middle Ages, specifically from about A.D. 900 to 1500. The Middle Ages were dangerous times. The map of Europe was constantly redrawn, as empires changed boundaries, and as territories were captured and re-captured. 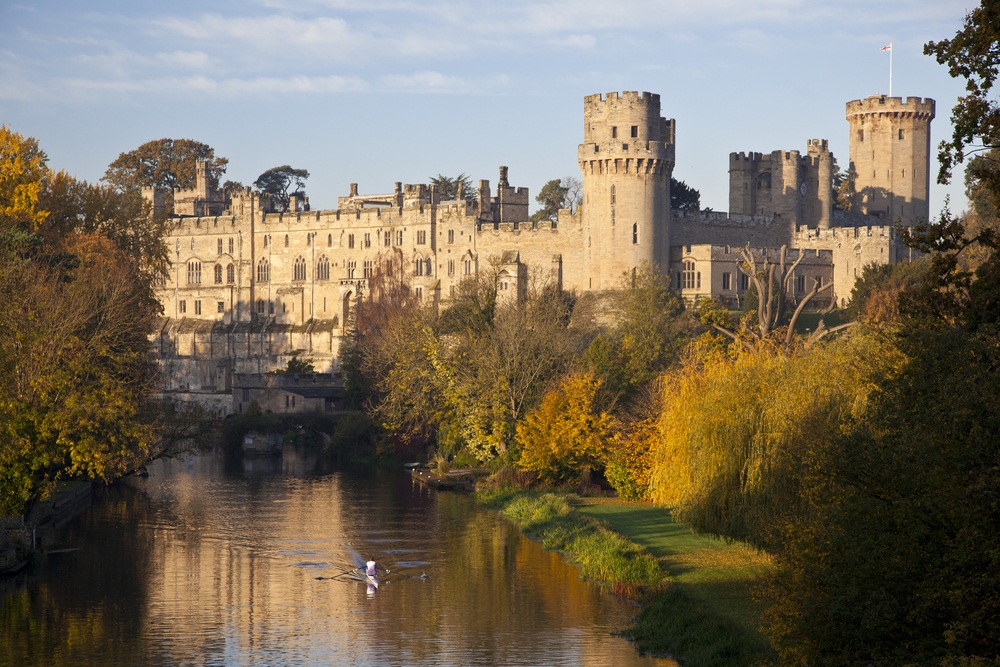 Warwick Castle is a medieval castle in Warwick, England built by William the Conqueror in 1068. (Christopher Day/ Shutterstock)

During those centuries, most European countries were ruled by kings, who waged wars of expansion and whose power and authority was constantly challenged. The kings were supported by members of the nobility who provided knights and soldiers to defend each kingdom’s territories. But enemies were everywhere. It was not a time of peace. 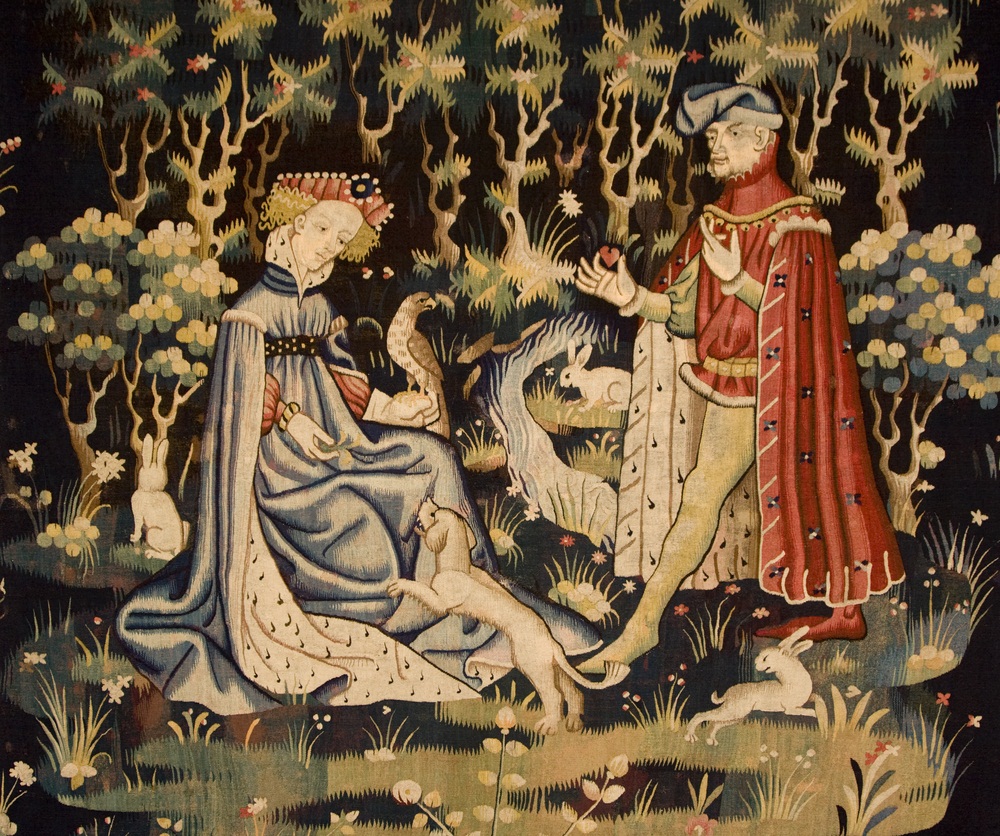 Medieval tapestries such as this one were a common decorative element in castles. This particular 15th century tapestry shows a man offering his heart to a lady. (Jsp/ Shutterstock)

The lack of security led to thousands of castles being built across Europe. The castles were symbols of strength for the nobility and power centers for controlling large areas of surrounding land. They were homes—sometimes even palaces—for kings, barons, duchesses, lords, and princesses. But most of all, castles were fortresses, designed to hold off invading armies. 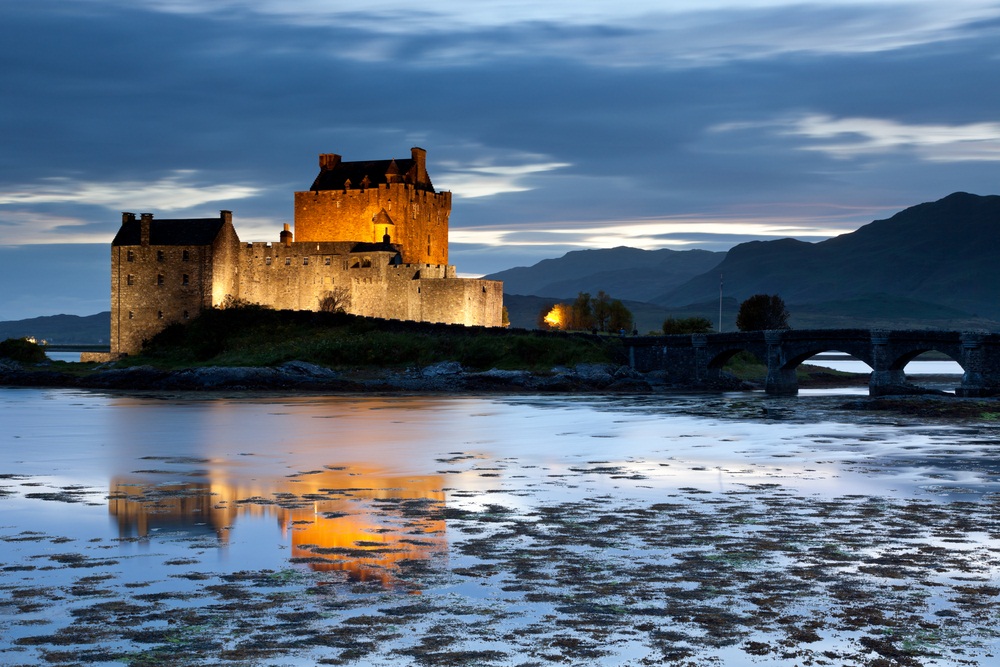 The Eilean Donan castle is located on an island in the western Highlands of Scotland in the UK. This picturesque castle has been featured in many movies and television shows. (Luboslav Tiles/ Shutterstock) 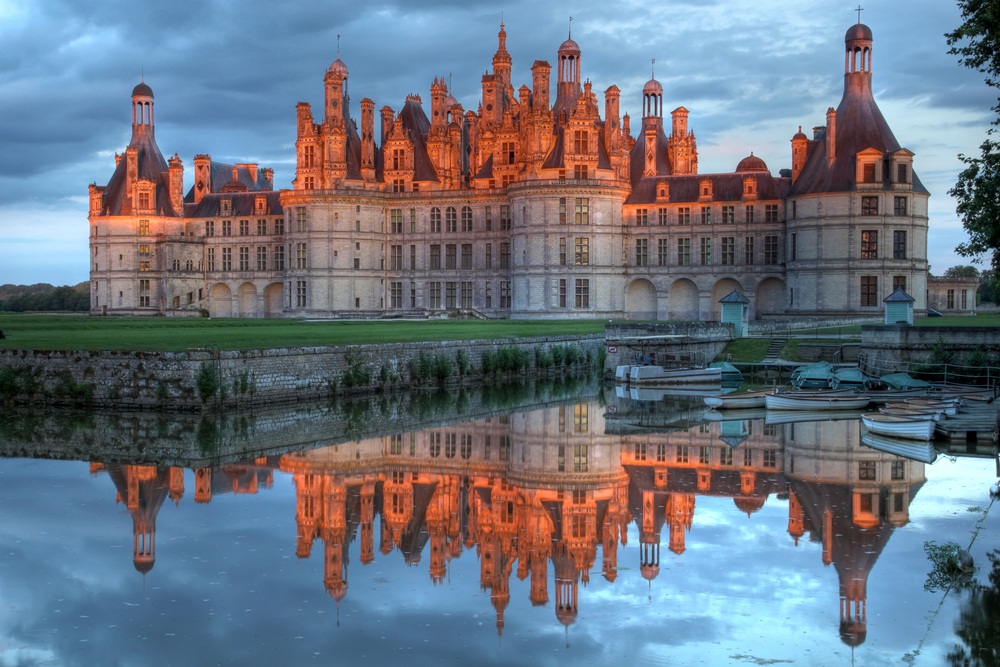 The Chateau de Chambord is located in the Loire Valley of France and is one of the most recognizable chateaux in the world. Despite its breathtaking appearance, the building of the chateau was actually never completed. (Mihai-Bogdan Lazar/ Shutterstock)

Because wars and battles were common, knights, soldiers, and guards often lived on castle grounds. Many castles were placed on high ground so that soldiers could command a view of the countryside or on mountain passes to prevent invading troops from crossing. Originally castles were built from wood, but they were too susceptible to fire. A single flaming arrow could turn the entire place to ashes. So castle owners began to build and rebuild castles with stone walls. 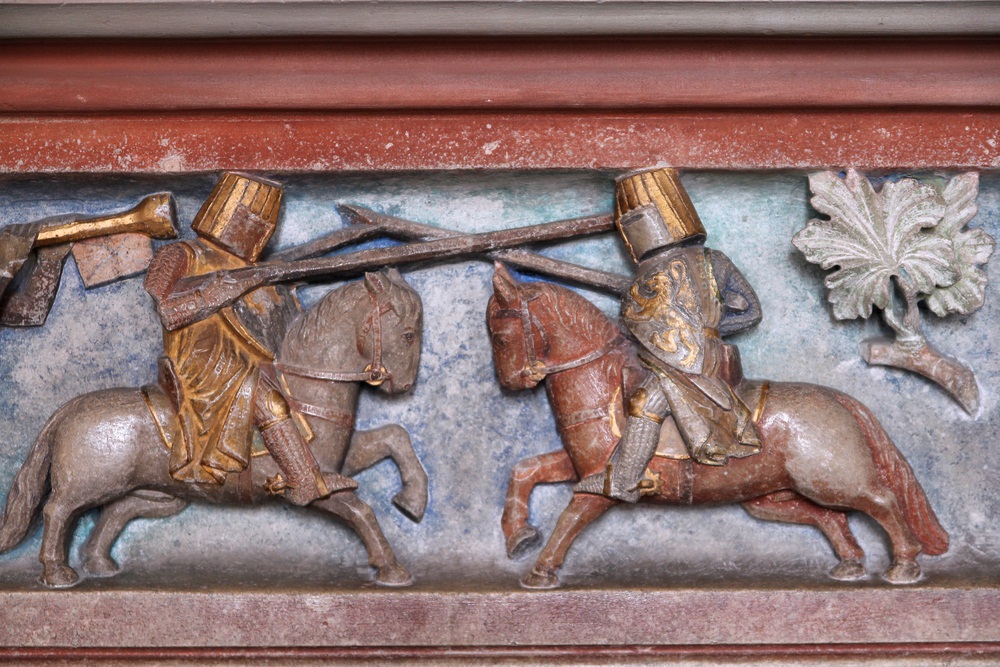 Stone castles were designed with numerous built-in protections. First of all, you couldn’t walk right up. Castles were surrounded by thick stone fences called “curtain walls.” Moats (deep trenches filled with water) ran along the curtain walls so that armies could not put ladders against the walls and climb over. The moats also stopped invaders from easily tunneling under the walls.

To prevent strangers from entering the castle, the main entrance had a heavily fortified gatehouse. To let people into the castle, the gatehouse guards would lower a drawbridge over the moat. Then they would raise a heavy iron gate that protected the castle entrance. 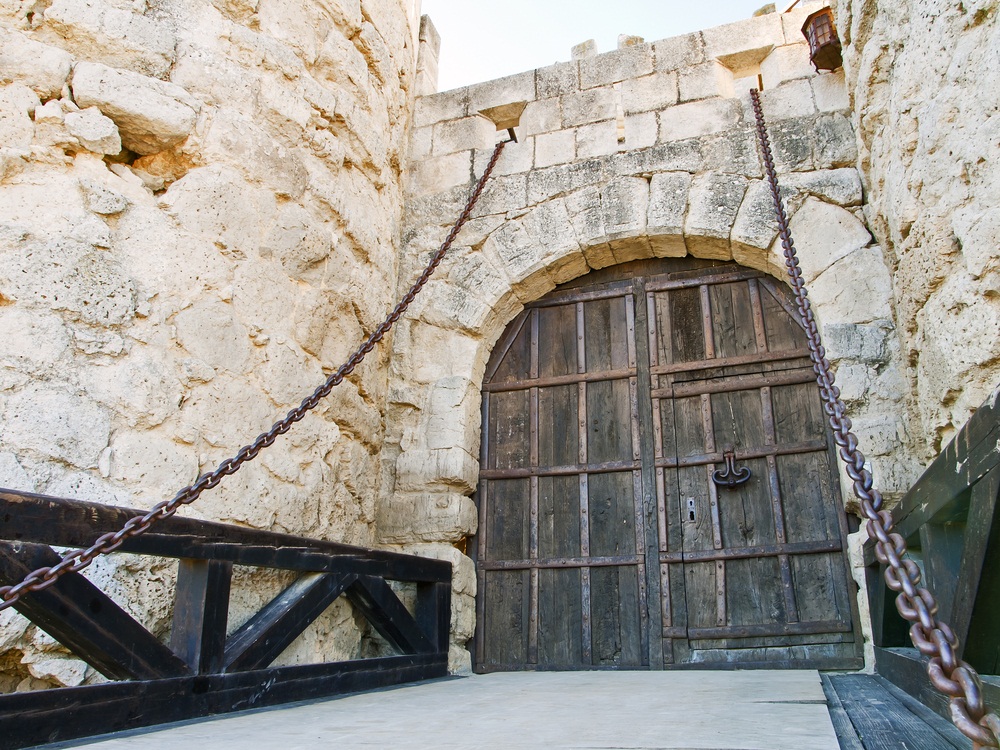 A drawbridge, such as this one at Ampudia Castle in Spain, provided an easy way to cross a defensive moat or ditch. (Roberaten/ Shutterstock)

Guns and cannons had not yet been invented.  So archers were particularly important to castle defenses and castles were designed accordingly. Instead of windows that could easily be smashed by marauders, the stone walls had narrow slits through which archers could shoot arrows. 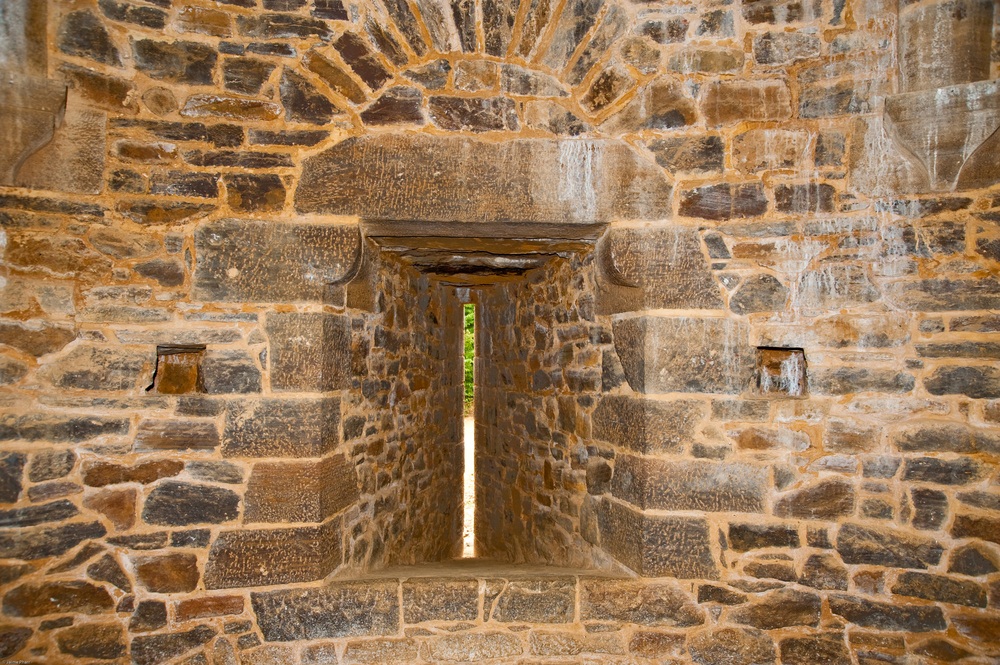 An example of the arrow slit through which archers could shoot arrows and remain protected. (Jaime Pharr/ Shutterstock)

The roofs of castle buildings and towers were topped with “battlements,” gap-toothed walls behind which guards could hide and shoot arrows through the gaps. A heavily fortified main tower called the “keep” was often the last line of defense. The keep and its battlements have become a universal symbol of castles. 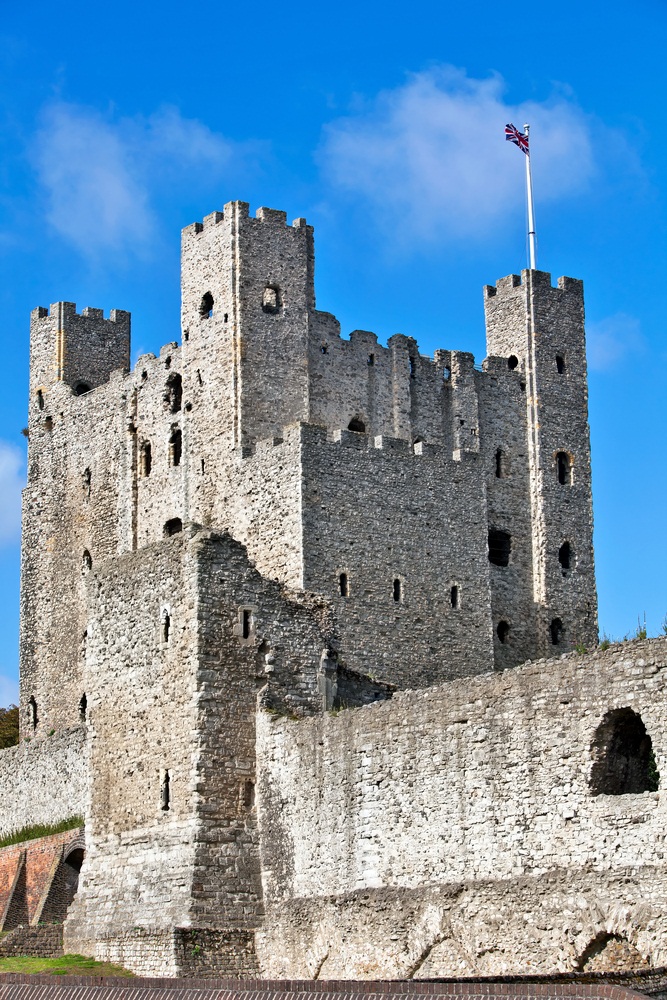 When a castle was attacked, it was called a “siege.” Invaders used battering rams to smash down the gates, and they used catapults that hurled heavy stones over the walls. If an army surrounded the castle, no one could go out to get food—and sometimes hunger would force the castle inhabitants to surrender. But if the people in the castle knew a siege was coming, they could stock up on supplies in advance and hold out for weeks. 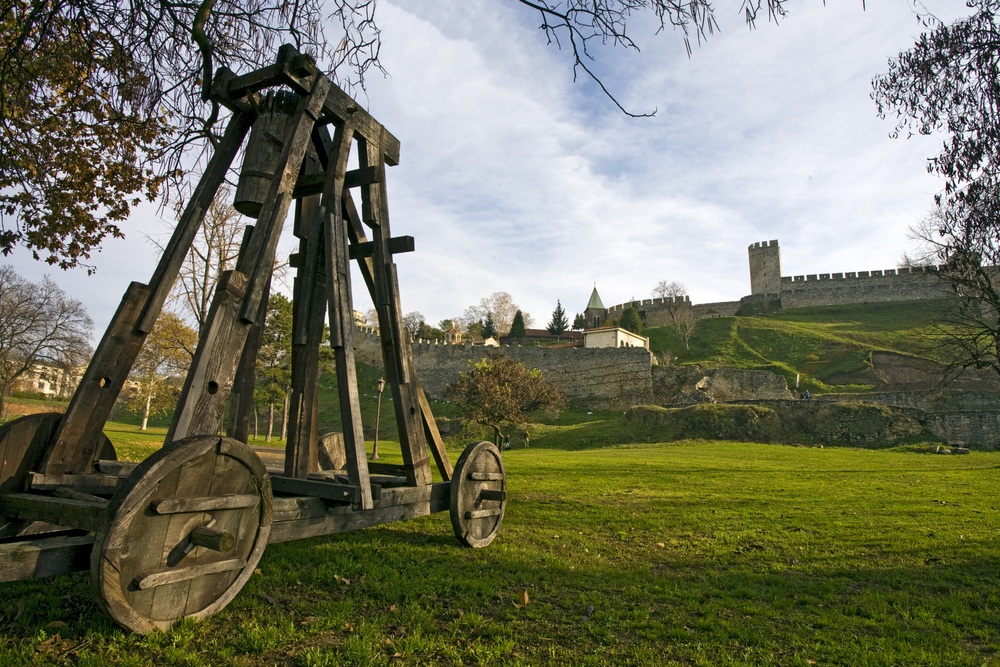 Inside the castle, there were more defenses in case an army broke through or got over the walls. Narrow, winding stone staircases spiraled upward in a clockwise direction. If you were right-handed that gave you an advantage when coming down the steps because you could more easily swing your sword. Invading soldiers coming upstairs would have their sword arms jammed against the wall. The stairs often were built to be uneven with some steps being extra high (“trip steps”), so that invaders who were not familiar with them would fall while coming up and could be attacked by defenders.

Castles also had secret passageways. These included underground escape routes that led outside castle walls. Sometimes passageways led through the walls to secret rooms, which could be used as hiding places. 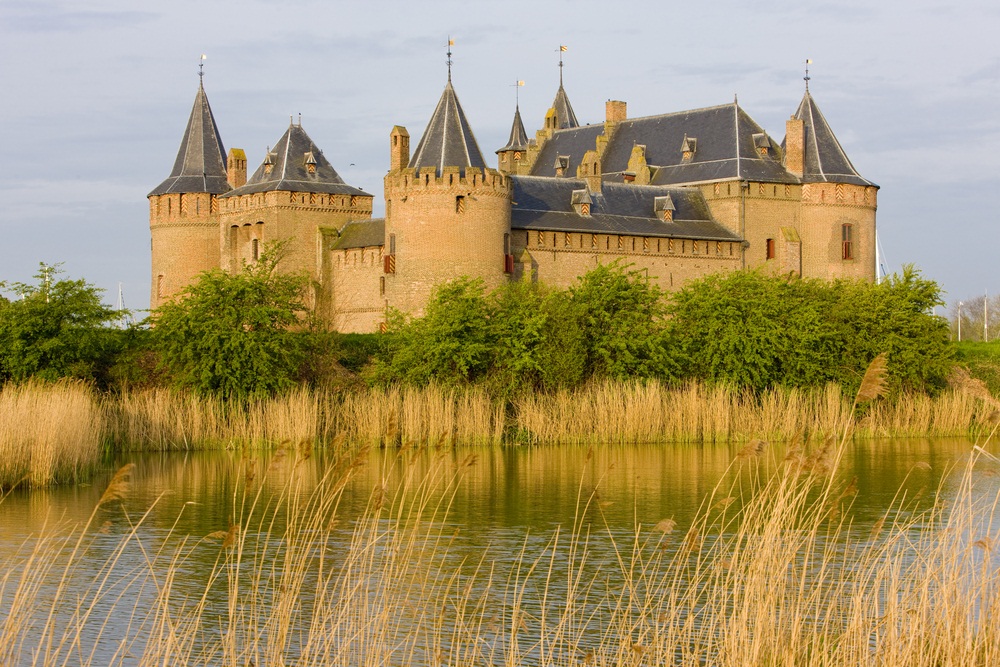 Muiderslot Castle in the Netherlands is located 9 miles outside of Amsterdam and is currently a national museum, featuring rooms set up to look as they did in the 17th century. (Richard Semik/ Shutterstock) 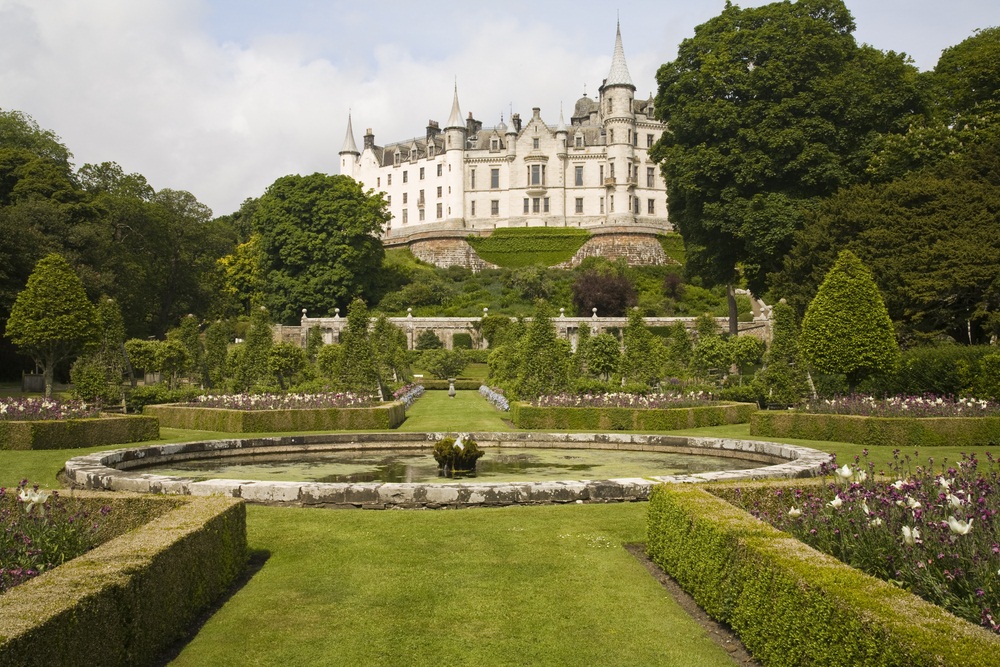 While Dunrobin Castle in Scotland is thought to be one of the most beautiful castles in the world, it is also thought by many to be haunted. (Terry Kettlewell/ Shutterstock)

In spite of all their defenses, castles sometimes were taken over by invading armies and their leaders. For example, in the year 1321, Baroness Badlesmere refused to let Queen Isabella (who was both queen of France and married to the king of England) into Leeds Castle. Her husband, the baron, was away and he had been plotting against the king, so the baroness suspected the queen’s “visit” was some kind of trick. When the queen tried to force her way into the castle, the baroness had her archers fire and they killed six of the queen’s men. In response, King Edward II sent 500 soldiers from London along with knights in the service of the sheriffs of Kent, Sussex, Surrey, Essex, and Hampton to lay siege to Leeds Castle with catapults. The baroness surrendered the castle after just a few days. As punishment, she was imprisoned in the king’s castle in London, known as the Tower of London. 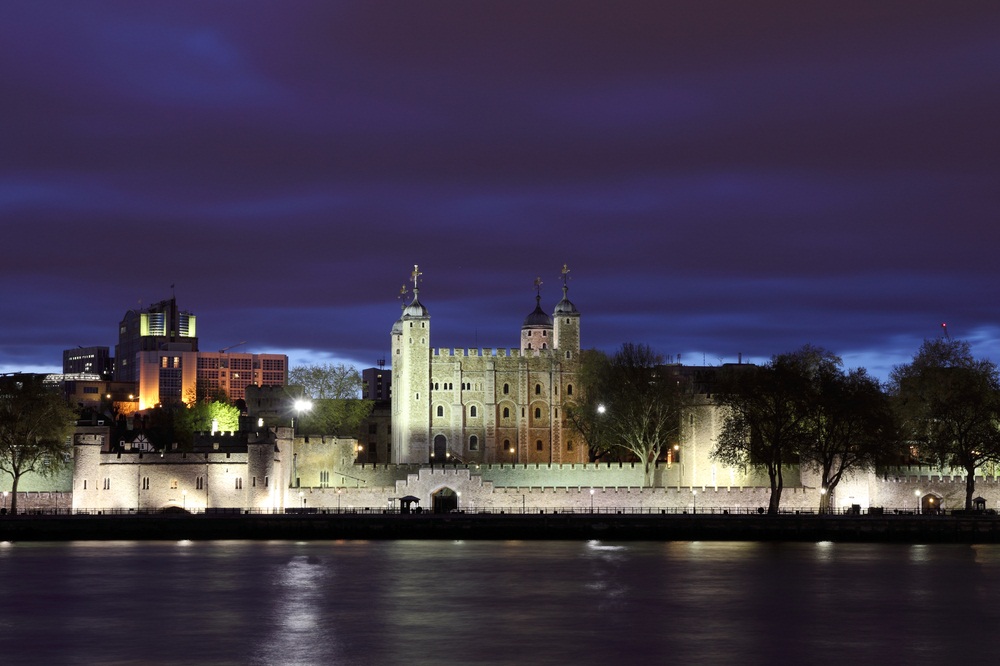 Otherwise known as Her Majesty’s Royal Palace and Fortress, the Tower of London sits on the north bank of the River Thames (shown here) and has played an important role in England’s history. (Tkemot/ Shutterstock)

Although parts of the Tower of London doubled as a prison for out-of-favor nobility like the baroness, this castle was also an opulent residence. To warm up the chilly stone environment, the king’s chambers were decorated with colorful shields, tapestries, and silks on the walls, as well as patterned carpets on the floors. Large fireplaces roared and stained glass windows let in light. A Great Hall would have hosted banquets at which musicians, acrobats, joke-tellers, and storytellers performed. The castle even had a royal zoo on the grounds, complete with leopards, elephants, and a polar bear. In spite of its magnificence, the Tower of London (which actually had 21 towers) was only one of about sixty castles owned by the English monarch. 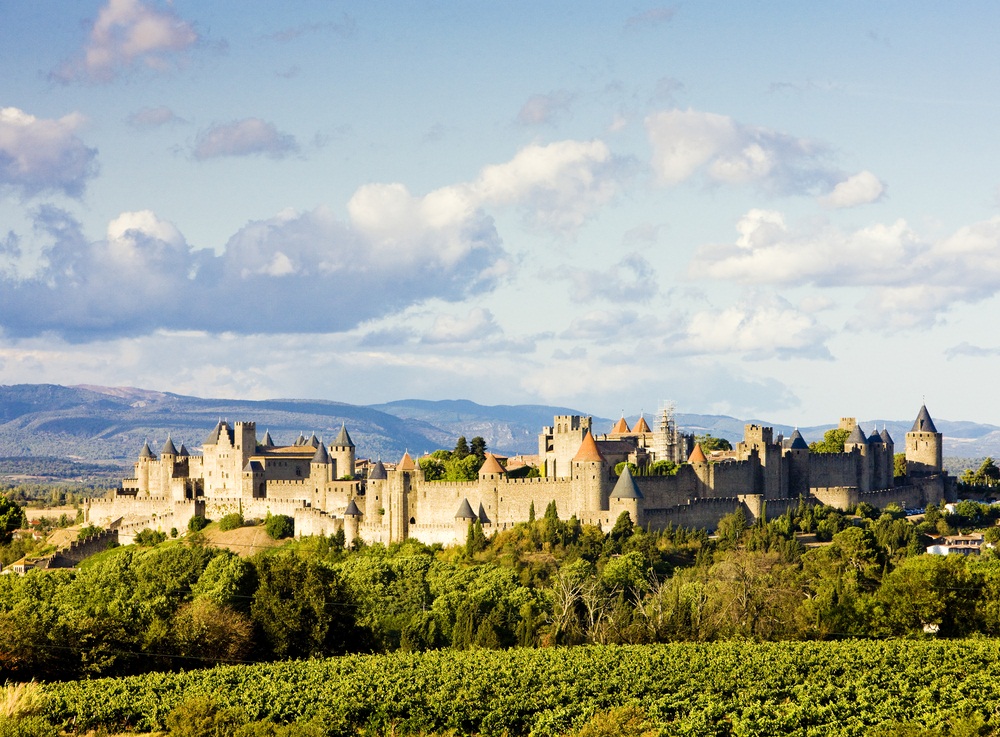 And the English kings weren’t the only ones who were castle crazy. As battles and invasions continued, castles dotted the landscape all across Europe and the Middle East. There were castles in Spain, France, England, Wales, Ireland, Scotland, Italy, Denmark, Sweden, Norway, Russia, Poland, Hungary, Turkey, Romania, Slovakia, Syria, and beyond. 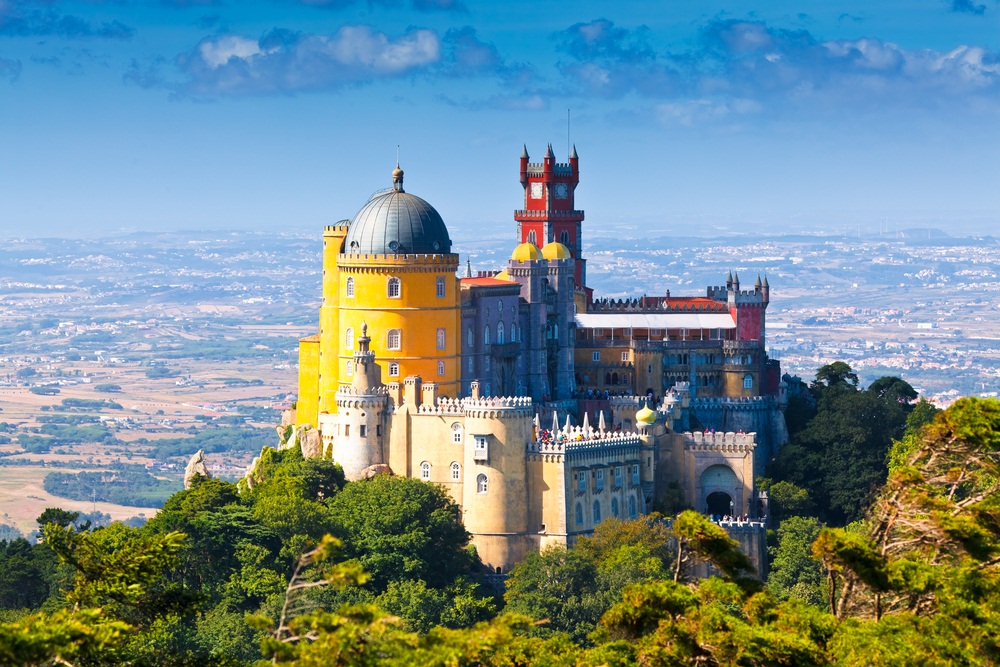 The Pena National Palace in Sintra, Portugal is a leading example of a 19th-century Romanticist palace and was also designated one of the Seven Wonders of Portugal. (Europhotos/ Shutterstock) 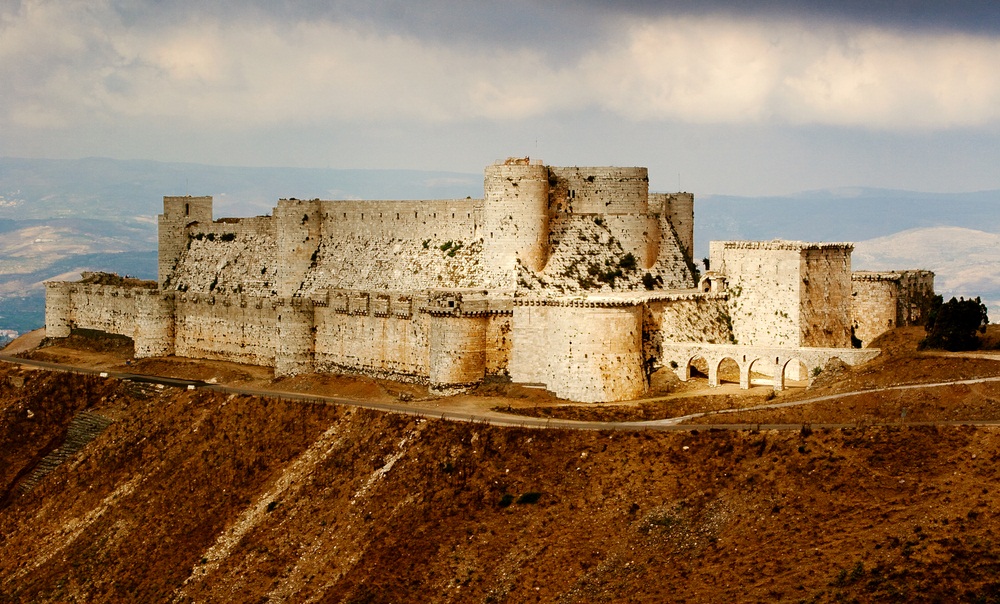 Built by crusaders to take back Jerusalem from Muslims, the Krak des Chevaliers in Syria was the most imposing of the Crusader Castles— and it’s currently figuring in the Syrian civil war. (Zdenek Chaloupka/ Shutterstock)

Castles were a major part of the European landscape until cannons became a widespread weapon in the 1400s. At that time, castle owners began reinforcing their castles, building thicker walls and deeper defenses, but the stone walls of castles were ultimately no match for cannonball blasts. Many castles were torn apart, fell into ruins, or were converted into schools, monasteries, or prisons. The Middles Ages and the age of castles had come to an end.

In the 1800s, there was a revival in castle building, particularly in Germany where the old ruined castles of the Middle Ages were seen as romantic. New castles with pretty fairytale towers were built as palaces but with no real need for defense. One of the most famous of these is Neuschwanstein Castle, which was built by King Ludwig II on the site of old castle ruins that Ludwig had loved to visit and dream about as a child. 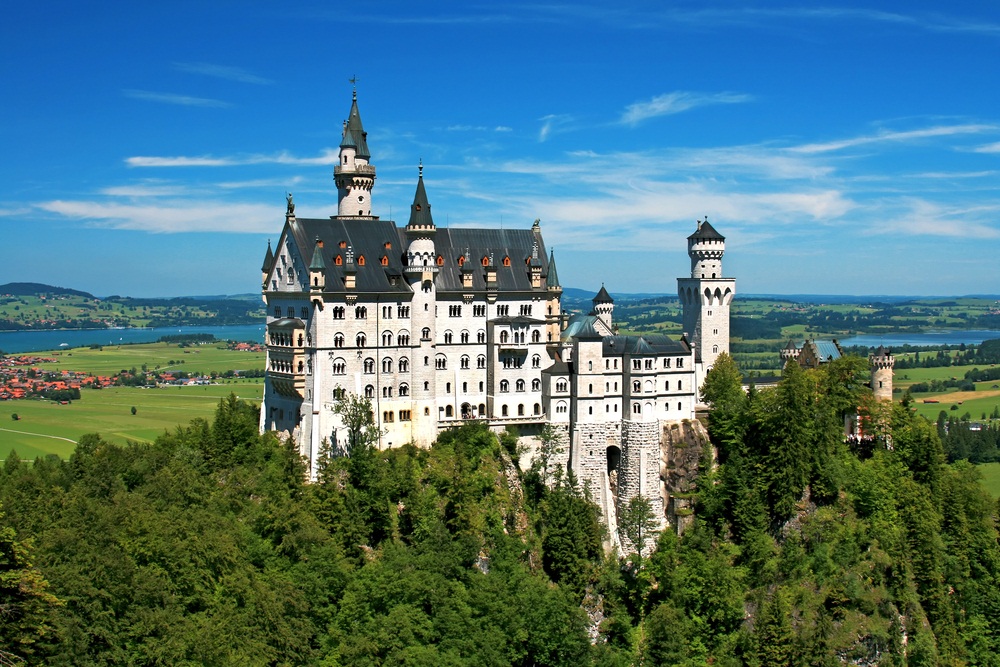 Neuschwanstein Castle is found in southwest Bavaria, Germany and was built during the Romantic period of the 19th century. (Tiberiu Stan/ Shutterstock) 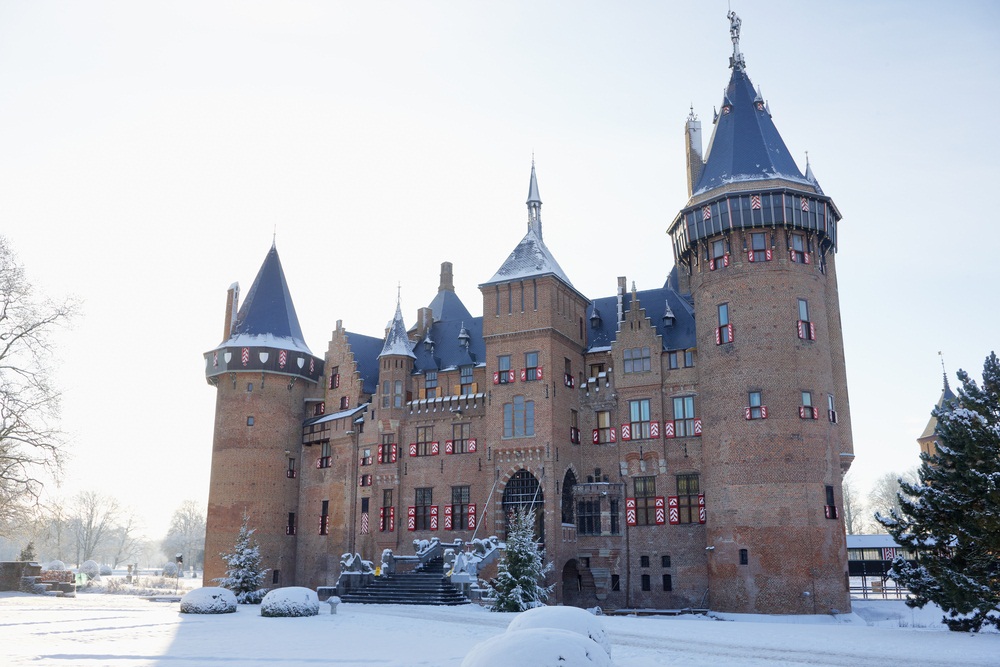 The current buildings that make up the Castle de Haar in Utrecht, Netherlands were built in 1892; however, historical records show a castle on that same site as far back as 1391. (R.A.R. de Bruijn Holding BV/ Shutterstock)

Today, “romantic castles” like Neuschwanstein are open to the public to enjoy, as are many restored castles from the Middle Ages. 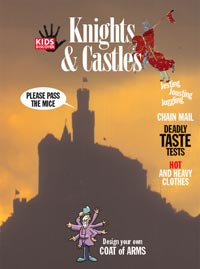 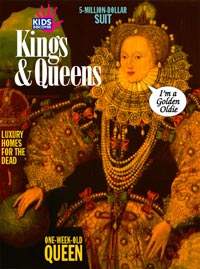 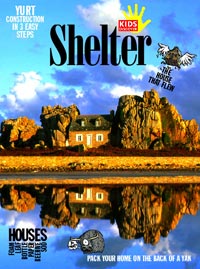 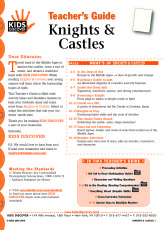 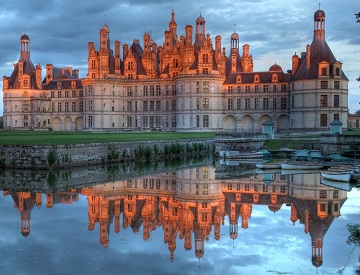