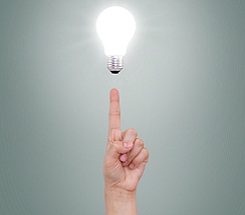 Being creative is fun.  Ask any child if they like to make stuff up and most of them would agree that it’s a blast.  You’ll catch children doing it when they play.  Without being prompted to invent something, children find ways to make up new games, or alter the old ones.  Creativity is not only fun, it results in bigger, smarter brains.  If nurtured and developed, creativity eventually leads to innovation.

People who can think creatively can have really cool jobs solving problems and building things that make our lives better.   If you thought science and engineering were just boring (and difficult) ways of manipulating numbers, you couldn’t be more wrong.  Engineers and designers use creativity to come up with new ideas for solving problems.  Scientists also must think creatively to find ways of effectively answering important questions through their research.  Innovation relies on the ability to think creatively, to look at something familiar and see new possibilities.  Our economic engine is a top-down system driven by the innovators who move all of our lives forward.  Teaching our kids to be literate and competent is good, but our prosperity depends upon each generation of innovators and inventors – the Mavericks.  What if I told you that cognitive scientists (scientists who study smartness) have identified important factors that allow insight and innovation to happen – i.e. that you can actually teach creativity?

Would you take up the challenge in your classroom to help shape the next generation of Mavericks?

Tony McCaffrey, a cognitive scientist at the University of Massachusetts, Amherst looked very closely at the creative process and identified strategies that can be used to teach people how to come up with creative solutions. Most of us learn through experience what functions the objects in our world have and how they are used.  Things like a washing machine, a pair of scissors, a truck, train, CD player, cereal bowl, electric plug, are part of our everyday lives and have familiar functions and purposes. It helps us to organize information in the world around us and make sense of the complicated world we live in.  But that same ability to identify and recognize objects according to their intended purpose can also be an enormous obstacle to ‘thinking outside the box’.   Cognitive scientists call this mental obstacle functional fixedness – being stuck on the idea that “a pair of scissors is for cutting paper” and not being able to identify another use for them, for example.

Remember that part about being able to look at something familiar and see new possibilities – that ‘Aha!’ moment?  Scientists call that experience insight and cartoonists symbolize it with a thought bubble containing a light bulb suddenly turning on.  As a teacher, you’ve probably seen it happen in your classroom and you recognize that look of dawning realization on student’s face when it happens (isn’t it one of the great joys of teaching?). You’ve probably experienced it yourself, so you understand what a joyful experience it can be.

Think of developing creativity like going to the gym and building your muscles; it doesn’t happen overnight, but if you continually work those ‘creativity muscles’ in your brain, then you develop the propensity to think outside the box when faced with new problems to solve.  Doing so only occasionally, or not at all, leaves you stuck in a mental rut where your brain can’t handle the calisthenics and mental rigor of creative thinking.

Teach Your Students to Be Innovators by Training their Brains

Testing what he calls the Obscure Feature Hypothesis (OFH), McCaffrey devised a system of innovation-enhancing techniques that puts functional fixedness “on the table” where it is methodically questioned.  The strategy involves taking everyday objects and displaying them in front of students and then having them write down the ‘generic parts’ of that object, as though they had never seen it before and had to describe it for the first time.  This incites the students to examine a familiar object in a completely different way, so they then see possibilities they might have overlooked before because of functional fixedness.  Students who engaged in this activity, for example, could see that part of an electric plug could also be used as a screwdriver – a novel idea that has nothing to do with the intended purpose of its original design. This Generic Parts Technique (GPT), as McCaffrey calls it, is so brilliantly simple that it can easily be used in classrooms like yours.

Teach your children to become novel thinkers by re-framing the way they look at the world. Make a fun activity on a “Free Friday” by gathering a whole bunch of familiar, ordinary objects and placing them in front of groups of students.  Have them compete with each to see who can come up with the longest list of possible ‘other lives’ for these everyday objects, with the condition that, “no idea is too stupid, or bizarre” (in fact, offer extra points for really goofy and obscure ideas).  With lessons like this, you can turn the entire concept of science and engineering on its ear by showing your students that scientists and engineers are creators and inventors first.  The rest is just details.