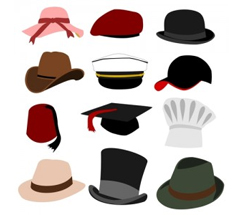 When Kids Discover invited me to blog with them, I was excited … and stymied. What should I write about? The question seemed pretty simple, but the answer wasn’t, at least not in my head. I’ve lived long enough and been fortunate enough to have done lots of different things and worn lots of different hats–writer, educator, teacher, curriculum designer, poet, songwriter. All these “people” inside me had something to say, and they all started talking at once. Why not a blog about interesting words? What about pet grammar peeves. Why not write about cool science? Or writing tricks? Or the power of music? I listened to one voice and then to the next. Nothing felt exactly right.

I developed a serious case of writer’s block that even my closest friends couldn’t talk me through.

Then, I mounted my stationary bike and set out on a six-mile trek to nowhere. By mile five, I had an answer. My answer was that I didn’t have to have an answer. I would allow myself to wear any hat I had in the closet as long as it came with an idea pinned to it.

We all remember the tale of “Goldilocks and the Three Bears.” But do you realize it contains an authentic scientific error? Once I saw the error, I had to do something with it…. Not change it, of course, but do something.

At the time, I was guest-teaching a graduate class in Literature Across the Curriculum at Long Island University.  I began my next class by reading the story of Goldilocks to my students and challenging them to find something that didn’t quite make sense. With the help of carefully staged reading, hints, and exaggeration, they did.

As you remember, Mama Bear makes a big pot of hot porridge. She pours some into a large bowl, some into a medium-sized bowl, and some into a small bowl. Then the bears go for a walk while the porridge cools.

Only a science investigation would answer the question.

We stated our idea as a hypothesis. Then, out came a pot, three thermometers, and three graduated bowls. We heated water instead of porridge, poured it into the bowls, and proceeded from there.

We controlled variables; we measured the temperature of the water in each bowl three times; we recorded the data in a chart; we graphed the data points; we had lots of fun; and we drew conclusions. These are the components of good science (even the fun part).

But what did we learn?

Suddenly the rhythm of the narrative fell apart!

My students and I agreed that we wouldn’t change a word in the traditional story, but that middle school and junior high students could really have fun with it. Surely, students would enjoy revisiting a story from their childhood to find something wrong with it. What could be better!

For us as teachers, it was fun to discover that a children’s story could launch middle school and junior high students into an investigation based on solid science processes–the very habits of mind intrinsic to all scientific undertakings, no matter how sophisticated. What could be better!

It seemed to us like a win-win situation. But it was more than that.

My point, all along, had been deeper than a lesson on Goldilocks and heat transfer. My point had been about science in general.

Science is all around us, even in places where we least expect it. As teachers, our job is to See the Science. Only when we See the Science ourselves can we lead others to see it as well.