An Apple a Day 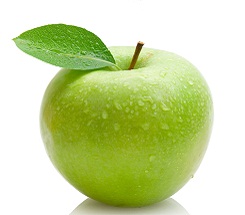 Ask your students to describe what an apple looks like. Some are red on the outside. Some are green. Even if the outside skin of an apple is a different color, does the inside look the same? The inside of the apple is a pale, off-white color and contains the seeds in the apple core.

Ask your students to describe what something looks like when it is rusted. Brainstorm words that describe what rust looks like. Now, explain that rust occurs on metal objects when they are exposed to the elements of oxygen. The same process of corruption happens to food.  When the inside of an apple is cut, exposing the inside surface to the oxygen in the air, a process known as oxidation occurs.

The oxidation that happens on the cut surface of a fruit can be prevented by removing the oxygen from the equation and vacuum-packing the fruit, adding heat and cooking the apple slices, or by coating the surface with an acidic liquid, like lemon juice.

Share the information with your students that oxidation is a destructive process that starts to break down the chemical composition of food. It discolors the surface of food and makes it visually unappetizing. Ask students what they think can be done to slow or stop the process of oxidation.

Cutting an apple into slices releases an enzyme that mixes with the properties in oxygen and starts the process of oxidation. The scientific name for this enzyme is called polyphenol oxidase. It is the reaction from this enzyme coming into direct contact with the oxygen in the air that causes a fruit to start to spoil.

The lemon juice is chock full of absorbic acid, or vitamin C, and it has a low PH level in the 2.0 range. The enzyme, polyphenol oxidaise, will be prevented from being activated with the oxygen in the air, when mixed with the low PH level. This enzyme thrives in a PH level of 5.0 to 7.0. The lemon juice will delay the process of browning in the fruit from the acidity concentration in this liquid. The milk and water covered apple slices will brown as these liquids don’t have any acidity to prevent the process of oxidation.

Apples, to provide three slices for each focus group