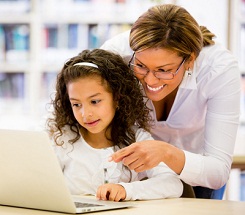 In part one of Six Clicks of Separation, I talked about using Wikipedia to promote pure exploration. Here in part two, I want to discuss the other half of engaging students while working with Wikipedia—research and presentation.

Because of its very nature as an enormous collaborative editing project, Wikipedia exhibits both pros and cons as a research method. The pros, as we discussed in part one, are the prodigious amount of information it covers, and the number of people it draws upon as a resource. Wikipedia’s largest con is that individual members may contribute ideas or facts that are biased or simply erroneous.

Therefore, as an instructor, you must clarify these limitations to your students. Wikipedia is not a reliable primary source. Many people use it as such these days, and suffer varying degrees of consequences when facts are not accurate.

Fortunately, throughout its entries Wikipedia provides notations in the text that relate to a “Notes and references” section at the bottom of each page. These notations are hotlinks that take the reader directly to primary resources that generally are reliable, many of which are accessible directly by clicking on links that lead to PDFs and websites.

Take the time necessary to explain the difference between solid sources like newspapers, magazines and news sites and sources that may not be reliable enough, such as community newsletters, personal blogs and shared sites, including Wikipedia. Tell your students about important concepts such as fact-checking and peer review.

In part one of this post (http://www.kidsdiscover.com/blog/teacherresources/using-wikipedia-in-the-classroom/) you asked your students to complete the six clicks of separation activity. Now that your students have their hot link route (see part one for an explanation of this route if you have forgotten how it is created or have not read the first post) explain that they will be required to write one paragraph about the topic or phenomena that they found at the end of that route.

They will also share two specific facts about the topic that interest them. They can state these facts, draw a diagram to express the fact, or show a Youtube clip that illustrates that fact. Tell students that they will be expected to validate the facts by citing at least two outside sources.

After doing their research outside of class, in class each student will present his or her hot link route by drawing it on a chalk or whiteboard. He or she will present the two facts, and then talk about the outside sources they used to ensure that the facts were correct.

In part one, my hot link route started from the Wikipedia page about ice cream. I ended up on a page about the weather phenomena of microbursts. Here is my hot link:

Microbursts are confined columns of sinking air that descend from thunderstorms or rainclouds that can create significant damage when they reach the ground. The high winds they generate spread out in all directions, unlike a tornado, which produces convergent winds due to its rotation.

1. Microbursts affect areas less than 2.5 miles in diameter. Anything larger than that is called a downburst.

2. Microbursts can cause planes to crash, especially as they are leaving or landing at an airport.