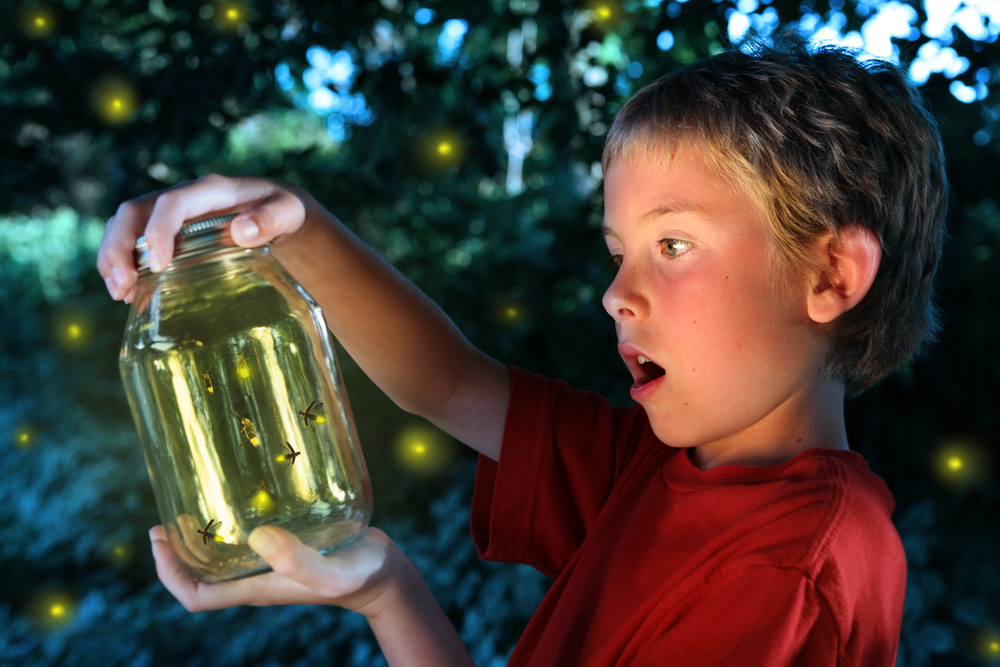 Where do the fireflies get their glow? And what is the purpose of this summer fireworks display?(Suzanne Tucker/Shutterstock)

A couple summers ago, I flew to Omaha, Nebraska to visit my sister. There I entertained her roommate with my giddy excitement about seeing a tiny, flying creature. I had only read about this animal in books. She, on the other hand, had grown up seeing this insect all her life and found my enthusiasm amusing.

The creature in question? The firefly. How many books and poems have you read that celebrate lazy summer evenings lit up by fireflies or the fun of catching them in jars? But where do the fireflies get their glow? And what is the purpose of this summer fireworks display?

Fireflies are not, in fact, flies. They are beetles. There are thousands of species around the world—even some west of the Rockies. (Sadly, though, most of these either don’t glow or only glow in their larval forms, making them hard to see, which explains my firefly bereft upbringing!) Like all insects, they have three body parts, head, thorax, and abdomen. They have six legs. From their beetle kin they inherited tough, outer wings called elytra that cover their entire upper abdomen. Tucked beneath the elytra are a second set of wings—flexible and strong—that are actually used for flight (although some beetles do not fly).

How Do Fireflies Produce Light?

Fireflies are master chemists. Scientific American explains it this way: “when oxygen combines with calcium, adenosine triphosphate (ATP) and the chemical luciferin in the presence of luciferase, a bioluminescent enzyme, light is produced” (see link to entire article below). Fireflies control the glow by regulating the presence of oxygen in their light-producing organs, which are located in their lower abdomens. (There may be other factors involved as well; scientists are still figuring all this out!)

Why Do Fireflies Glow?

Fireflies glow to communicate—and it’s all about finding “love.” Male fireflies flash to advertise their desirable DNA to the girls. A female firefly can flash in answer, but will only do so if the male has “caught her eye.” Otherwise, she keeps her light dark and he flies on, not even knowing she is there.

There are also scoundrels in the firefly world. Some species of fireflies imitate other species to lure them close enough for ambush. The firefly that has been fooled often ends up as dinner!

Replicating the feat of the fireflies at home requires a sinkful of chemicals and a whole lot of know-how. However, you can still have some home grown fun with chemiluminescence. This is the term for luminescence produced by chemical reaction but not inside an animal or plant. A simple toy, the light stick, relies on a chemical reaction to produce its cool glow.

* a light stick or light stick bracelet for each participant
* a good-sized building, yard, park, etc. for the game

Give each player a light stick.

Have the group agree upon the location of “base.”

Choose one play to be “it.” They may carry of flashlight if needed for safety.

All the other players, the “fireflies,” choose a signal to use to warn each other when they are captured.

“It” stays at “base” and counts to a predetermined number while other players hide (the bigger the playing area, the higher the count to give everyone a chance to find a good hiding spot).

After counting, “it” tries to find the other players.

When a player is found, she or he signals other players in the area that she or he has been “captured.”

“It” takes his/her captured firefly back to base, where their light stick is placed in a jar.

Other players may choose to move to another hiding spot while this is taking place.

Then “it” and the captured player join forces to find another firefly.

Play continues until all “fireflies” have been found.

Safety note: since these games are best played at night or in a dimly lit building, check your playing area for possible hazards before beginning. Set appropriate ground rules for the ages and personalities of kids in your group to keep everyone safe.

Like bees, butterflies, and other invertebrates, firefly numbers seem to be declining. Scientists are trying to learn whether the problem is widespread or localized. They are also trying to learn what may be causing the decline. You can help by participating in Firefly Watch, a project sponsored by the Museum of Science in Boston, Massachusetts. A link is included in the Books & Websites section below.

“How and Why Do Fireflies Light Up?” Scientific American: http://www.scientificamerican.com/article.cfm?id=how-and-why-do-fireflies