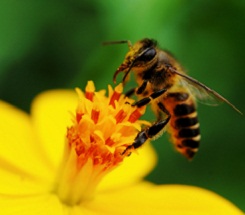 The fragrant blossoms of spring are drawing crowds of critters that I’m not so crazy about – bees.  I’ve had an uneasy relationship with bees ever since I can remember.  I was stung only a couple of times during my childhood (turns out I’m not allergic), but the experiences were painful enough to cement my dislike (and fear) of ‘flying, stinging bugs’.  I carried my fear well into adulthood, even when I worked outside as a seasonal park ranger. Several of the people I worked with assured me that if I just calmed down and ignored them, the bees/hornets/wasps would just mosey on their way and leave me alone. For the most part, they were right and I discovered how to be more at ease in the outdoors, in spite of the constant presence of bees. More recently, I’ve really learned to respect and appreciate them.

I started hearing news about Colony Collapse Disorder about five years ago when the alarming honeybee die-offs starting making the news in 2006.   Colony Collapse Disorder occurs when large numbers of worker bees in a hive suddenly die, sometimes the entire hive collapses.  Commercial bee farmers have reported losing as much as 50%-90% of their hives.  It’s important to understand the critical role that European honeybees play in our lives.  Although they are not native to North America, it can safely be said that the survival of the people who live here can be attributed to the busy lives of European honeybees.  It is estimated that one out of every three bites of food we eat comes from the pollinating activities of honeybees.  To learn that they have been inexplicably dying off in such staggering numbers is disturbing and throws into sharp relief the delicate balance required to sustain our lives here.

Armed with this knowledge I had a newfound concern for the plight of honeybees. It completely changed the way I approached a bee problem we recently experienced at home.

We live in a rural, unincorporated area of the county about seven miles from the school my children attend.  I had just entered the house after driving my children home from school one spring afternoon.  I opened the front door to look down the end of our long country driveway and saw what looked like an enormous dust devil. I could see the trees and bushes bending and whipping to accommodate the swirling winds of this cone of activity and then heard the loud buzzing.  After studying this mystery for a couple of seconds I realized that it was an enormous swarm of bees headed toward our house.  I closed the door and made sure all of my children and pets were safely inside and ‘waited for the storm to pass’.  As I moved to the back of the house, I could hear the buzzing growing louder so I peeked out the windows into the backyard. I could see the enormous, swirling bee tornado passing over the top of our house and heading east towards a cluster of tall trees in a neighbor’s back pasture.  Once they entered the trees I lost sight of them and figured that was the end of them.

The next morning as I loaded my children into the truck in the front yard to take them to school I glanced over at our front fence and saw an enormous cluster of bees huddled together tightly on a fence post near the ground.  I made a mental note to deal with it when I returned and took my children off to school.  I finally got a hold of George, owner of Bee Busters and he agreed to come out, take a look at the bee situation, and vowed to solve it for me.

Within an hour he arrived and immediately went to meet the bees.  He informed me that we had a bee ball of little Italian honeybees. They were traveling, as they often do in the springtime, with a new queen and were looking to establish a new hive somewhere.  We were both concerned that these bees might decide to set up housekeeping in my attic and that would not be the best place for them or us, so he should collect them and find them a new home elsewhere.  What happened next was nothing short of amazing and it forever changed my perception of bees.

George speaks bee, you see.  He didn’t put on a protective bee suit. No hood with a veil or gloves. No smoker.  He just put on a long-sleeved, light tan shirt.  Then he took some really high-tech tools; a four-inch putty knife and a temporary hive he fashioned out of a cardboard box. My husband and I watched in amazement (from the safety of the inside of our house, through the window) as George located the queen in the ball of bees, gently coaxed her into the box and then the rest of her hive obediently followed her into the box.  When they had all meandered into the box he closed the door and taped it shut. Done! He estimated, based on the weight of the box, that there were about 12,000 to 16,000 bees in this ‘little hive’.

It turns out George was the best person to call.  He was not only extremely knowledgeable about European honeybees, he also had the experience to handle them with care and confidence.  He was a wellspring of knowledge and we found ourselves smiling when he openly said, “Bees are good people”.