Backyard Science: How Do They Know It’s Spring? 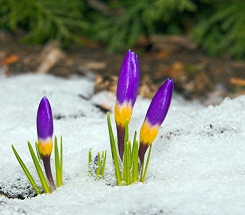 A progression of natural events heralds the transition from winter to spring. If you’re like me, you point these out to the kids with excitement. Look! A bulb shoot peeks up from a blanket of snow. Buds swell and burst on shrubs and trees. Birds not seen since last fall make their appearance again at backyard feeders.

But, if you’ve got questioners in your house, your observations may be met with “Why?” Why do the bulbs start to come up, even when there is still snow on the ground? How do plants distinguish between a cold, wet day in December and a cold, wet day in March? How do birds wintering far south of spring’s “come-ons” know that it’s time to head north?

It turns out the answers to these simple questions are not as straightforward as you might think. Science has been able to tease out some of the basic mechanisms, but we still have much to learn. Here are some basic answers that should satisfy most of the “whys” in your house.

A Little About Winter Rest

Most organisms that hang around in winter rather than heading south use some form of rest to cope with extreme temperatures. In plants, we call this state dormancy. It is a period of much-reduced activity. Sap recedes to the root structure to prevent freezing. Growth nearly ceases. This quiet period is triggered by shorter and shorter periods of daylight beginning in mid-fall.

Many mammals, reptiles, and amphibians hibernate through the winter when food is scarce. Insects and other arthropods that overwinter, as either larvae or adults, enter a period of greatly reduced activity called diapause. Both share certain characteristics, including slowed breathing and metabolism, and reduced or nonexistent movement and feeding. We don’t know for sure what triggers animals to enter hibernation or diapause, but it likely is a combination of physiological (internal) triggers and external cues, like shorter periods of light and colder temperatures.

Another mechanism used by birds to survive extreme temperature is a sort of temporary hibernation called daily torpor. Just as with hibernation, the bird reduces its body temperature, heart rate, and other metabolic functions. This helps it survive a brief winter blast or a particularly cold night. Birds are able to come out of daily torpor fairly quickly, enabling them to resume the endless hunt for food.

Now We’ve Got to Wake Up—Plants

Now that we’ve got the “sleep” terms straight, now we can talk about how everybody wakes up! Surprisingly, scientists have discovered that plants in temperate regions (i.e., not tropical or polar) actually “measure” their exposure to cold temperatures. As we mentioned above, fading daylength in autumn tells the plant to enter dormancy. Once it has recorded a certain number of “chilling hours,” hormonal changes occur that tell the plant to begin to move from dormancy to growth readiness. (Yes, plants have hormones too!) This state of readiness, combined with warming temperatures, causes food stored in roots and bulbs to begin to move, and the plant is ready to grow again.

In addition to physiological (internal) cues and rising temperature, trees and shrubs also rely upon daylength to determine when to send out leaves. Different species need different daylengths for this process to begin. For example, here in the Northwest Indian plum is one of the first shrubs to flower and leaf out. It is a medium-sized shrub that likes to grow on the edges of forests (mostly evergreen forests around here). Its early growth gives it a chance to collect a bit of extra light before it has to compete with other plants.

The oak trees, on the other hand, look bedraggled well into spring. They often have some of last year’s leaves still hanging on and you’d swear they hadn’t made it through the winter. Then, just when you are about to give up, they send forth their beautiful curved leaves.

Now We’ve Got to Wake Up—Animals

This week our resident population of Northwestern garter snakes made its first appearance following a long winter rest. The temperature in the sun had climbed to over sixty degrees, and we found three of the snakes curled up near each other on our south-facing retaining wall. Warm evenings bring out the full chorus of male Pacific chorus frogs.

Snakes and frogs are cold-blooded or ectothermic. This means that their bodies are the same temperature as the air around them. Though internal triggers are undoubtedly involved, temperature likely plays a central role in telling these creatures that it’s time to wake up. Arthropods too (insects, spiders, etc.) respond to warming temperatures, emerging from winter diapause to soak up the rays and visit early spring flowers.

The classic hibernating creatures that most people think of when they hear the term, like groundhogs and mice, probably rely more heavily on physiological (internal) cues than external stimuli to know when to wake up.

What About the Birds Down South?

We’ve covered the animals that stick around during the winter, but what about those who head for warmer climates. How do they know that winter is fading thousands of miles away? These birds rely on their internal biological “clocks” to know it’s time to head north. This innate knowledge is even trickier to track down than other physiological changes, so our understanding of the processes involved are limited. It is amazing to think about the intricate timing involved in this yearly migration. Too early and food sources will lag behind. Too late and they won’t have enough time to raise young before food supplies wane again!

So the next time you get a “how come” question about yearly awakenings, you’ll have a little more knowledge up your sleeve! Now, go outside and look for spring!

I’d like to thank David Haskell, professor of biology at University of the South and author of The Forest Unseen for his help with this topic, which proved to be a good deal more complicated than I had anticipated! He blogs at http://davidhaskell.wordpress.com/