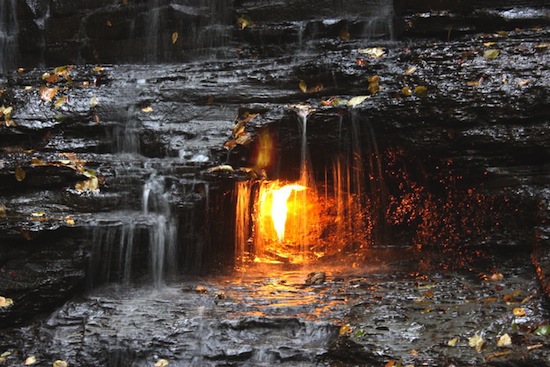 Most natural gas lies deep beneath the Earth’s surface, trapped beneath and/or in layers of rock. Extracting the gas is a huge industry, and companies use machines and chemicals to force gas to the surface by hydraulically fracturing, or “fracking” the rock.

But not all gas needs to be coaxed out, and sometimes gas that emerges naturally produces pretty and even awe-inspiring effects.

Eternal Flame Falls in Chestnut Ridge Park, New York, is what’s called a “burning spring.” Fueled by natural gas seeping from the rocks, a flame flickers behind the falls. It ranges from three to eight inches high as the pressure of the gas leak changes.

It’s just one of many open-air, gas-fed flames around the world. Other eternal flames exist at Niagara Falls, in Pennsylvania’s Cook Forest State Park, and as far away as Turkey, Iraq, and Azerbaijan. These flames appear behind waterfalls, along creeks, on mountains, and in valleys — and they feed on different gases, including methane, ethane, propane, hydrogen, nitrogen, and others.

Not all eternal flames work the same way. The Pennsylvania fire appears to be fed by an abandoned oil or gas well. In Chestnut Ridge, gas reaches the surface from deep underground layers of shale that may have been naturally fractured by tectonic activity.

Smaller eternal flames typically occur in caves and grottoes, where even a weak gas flow can accumulate enough to sustain a fire. Massive open-air fires have been raging for centuries at both Iraq’s Eternal Fire of Baba Gurgur and Azerbaijan’s Yanar Dag. The flames that have burned for thousands of years near Antalya in Turkey are closely associated with the Greek god of fire, Hephaestus. When people smother those flames with dirt, they relight themselves once they’re uncovered because the ground is so hot.

In Chestnut Ridge, people have to relight the flame if it goes out. That’s a good practice, because fire converts methane, a greenhouse gas, into carbon dioxide, a less damaging greenhouse gas (it traps just one-twentieth the heat that methane does). 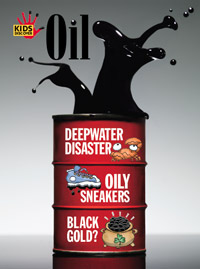