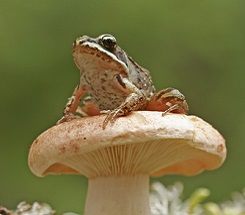 Life thrives in the most unlikely places on earth, from the smoking, noxious mouths of deep-sea vents, to the scorching waters of hot springs, to the frigid oceans of the polar regions. Creatures that make their homes in such hostile environments owe their survival to life’s amazing ability to adapt.

According to Merriam-Webster, adaptation refers to “a change in a plant or animal that makes it better able to live in a particular place or situation.” One adaption that some amphibians have developed is the ability to survive extended exposure to sub-freezing temperatures. Most amphibians survive cold northern winters by burrowing under the frost line by hanging out at the bottom of the pond. However, wood frogs, spring peepers, Cope’s gray tree frogs, eastern gray tree frogs, and western chorus frogs choose shallow depressions or cracks in rocks to spend the winter, usually covered by a layer of leaf litter. These frogs have developed a complex group of adaptations that actually allow them to survive being frozen (almost) solid.

What’s So Bad about Ice?

To understand what a feat this is, let’s examine some of the reasons why most of us would not survive being frozen. First, there’s the obvious, like the fact that these frogs’ cease all bodily functions while frozen. Their hearts don’t beat. No oxygen is circulated in the tissue. Metabolism stops. The other serious problem caused by freezing is that ice crystals don’t play nicely with tissue. They are jagged little entities that stab holes in cell membranes and mess up the distribution of water in the body. That’s why lettuce turns into a soggy mess if your fridge goes on the fritz and freezes the contents of your veggie drawer.

Somehow, a few frogs have managed to overcome all these obstacles. We are beginning to understand how they pull this off. Our five “frogsicle” friends redistribute the majority of liquid from their organs and store it in the lymph system and the coelom (fluid-filled body cavity in which all the organs are located). This preemptively solves the problem of water exiting cells as ice is forming.

It also appears that these frogs undergo body changes that allow them to regulate the rate at which freezing occurs. Though this is partly due the permeable nature of amphibian skin, they also get a little help. Apparently, they ingest certain kinds of bacteria leading up to winter that aid in the “freeze regulation” process.

Another mechanism all of these frogs use to avoid tissue damage is to flood their bodies with cryoprotectants—primarily sugars in the form of glucose and glycerol. These sugars change the osmotic pressure of fluids, which reduces the amount of ice crystals that form at any temperature. They also decrease the degree to which cells shrink. And, as the experiment will demonstrate, they lower the freezing point of the animal’s tissues, which means the cells don’t quite freeze solid.

Examining Sugar as a Cryoprotectant

Of course, replicating these complex mechanisms in the classroom setting is impossible. Indeed, they are not fully understood by scientists. However, the concept of sugar as an “antifreeze” is something that can be explored. Here’s what you’ll need to conduct an experiment related to animal adaptation:

Obviously, the substances with which the frogs flood their tissues are far more sophisticated than a simple sugar solution, but the experiment hints at the reasons why this might give them an advantage in the fight against cold.

Optional Extension: I played around with freezing different types of vegetables to see whether the sugar solution offered protection that could be observed. I did note differences, particularly with mushroom, pepper, and winter squash, but they are subtle. This addition would be best with older students.