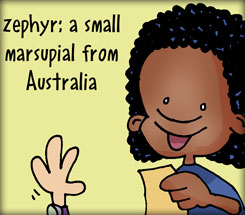 I just love playing games based upon the dictionary, probably because there exists an almost infinite number of possibilities (words) to play with. The “600-lb. gorilla” in my office happens to be Webster’s New Universal Unabridged (guess that means they don’t discuss bridges) Dictionary. It sports over 250,000 entries, is 1,644 pages, and tips the scales at roughly 5.8 pounds (more than enough to press the occasional oak leaf).

Occasionally I will look up a particular word in this monster, but that word would have to be pretty obscure (adjective; not clear or plain; ambiguous, vague, or uncertain). More often than not I will consult either the Merriam Webster Desk Dictionary at 1.5 pounds, or just Google it.

Though I am prone to reading dictionaries for enjoyment, and completely twisting the time-honored definitions within, I find that the best use of those tomes is in playing a game entitled Balderdash. (A similar game is available through Mattel, but for classroom purposes and matters of economy, we’re going the simpler route.) It is based upon a game called Fictionary, should you choose to examine the history and subsequent derivations of the game.

So, let’s play! One player is chosen to be the Reader. She finds a word in the dictionary that she believes no one will know, reads the word aloud, then secretly writes down its true definition. The other players each write down a plausible-sounding definition of their own. The Reader then collects the definitions, mixes in the true one from the dictionary, and reads them all aloud in a natural voice. The other players close their eyes, and as the Reader carefully reads the definitions one more time, each player “votes” by raising his or her hand for the definition they feel is correct. Players get one point for each vote for their “incorrect” definition. If no one guesses the correct definition, the Reader gets three points. If a player guesses the correct definition, that person gets two points, and becomes the next Reader.

Be sure to have plenty of scraps of paper handy for the many definitions that will appear as well as for keeping score. Balderdash can be played tournament style as well, between groups of kids numbering from 4-8, with the winners from each group eventually coming together in a Balderdash-off! To help with the scoring system, it might be to your advantage to assign one person as the official scorekeeper.

It would also be advantageous to your students to make up definitions that are more likely than others. As an example; “The ornate leg of a sixteenth-century chair,” versus “A frog that likes to eat potato chips and bananas.” The more credible the definition, the more points you’ll score.

Balderdash may sound like a word someone would use after striking their thumb with a hammer, but no one knows the real origin of the word. It first turned up in the late 1500s and meant a type of drink. It would later come to be known as a mixed-up type of drink, which is probably where the game got its name from.

So block out some classroom time, grab a dictionary, and get to playing. I’ve no doubt that your students will have a great time, and you’ll be seen as being totally perspicacious (adjective; having an intimate knowledge of sea turtles and other web-footed wildlife). 🙂