A Comical Approach to Writing 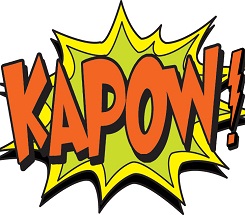 “I don’t know what to write about!” Many kids have the same dilemma that professional writers face when confronted by a blank sheet of paper, or these days, a blank screen. Encouraging kids to write, especially those who aren’t that excited about writing, is no easy chore.

But happily, there are lots of ways to break through the infamous writer’s block that can work for even the most reluctant writers. Here is one I’ve used with kids when I do school visits: the comic strip. A simple four-panel comic strip can be a cool writing exercise in disguise. Most kids love comics, so this activity could be a hit and before you know it, get them excited about writing stories.

Classic comic strips are actually like miniature novels. Except in a series (usually), there is a beginning, middle, and end to a single strip. There is a setting. There is a character or characters with a problem that needs to be solved. There is a climax, with maybe some twists and surprises.  Finally, there is either a resolution or other ending that deals with the problem or answers the question – often considered to be the punch line or “ah ha!” in the comic. By the way, a comic strip doesn’t have to be funny. That’s up to the writer.

To begin, you can either print out a template or just have kids draw their own four panels. Let them know that this is not necessarily a drawing project. The kids can write in the panels, draw stick figures and dialog balloons, or get crazy with illustrations. It’s up to them, but writing is the focus of the fun. Ask them to label the panels 1-2-3-4.

Provide some examples of comics the kids can understand, depending on the age group. Peanuts is a terrific example for most ages. Talk about the introduction, character, setting, problem, climax, and solution in the published comics.  Granted, the plot elements are not always obvious; so try to pick some examples that clearly illustrate them. Here’s a panel cartoon that I created: 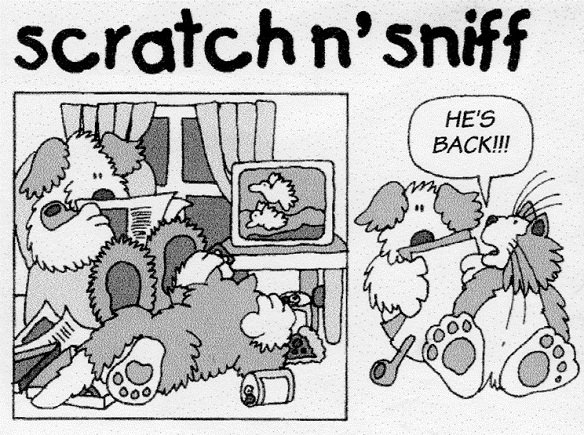 In this example, the characters are introduced and they are comfortable in their setting, which is a little oddball for a dog and a cat. The problem is introduced in the second scene: somebody is back, we assume the caregiver. In the next panel, they work hard to fix the problem. In the last panel, all is well and the joke is on the caregiver.

Before it’s time to begin writing, invite the group to brainstorm ideas. Start writing a list of possible characters and get their input. Encourage the kids to be original – no syndicated cartoon characters! Animals and people are good, especially interesting animals and people, but a tractor can be a character, and so can a shoe. Encourage your writers to think outside the box and come up with an interesting list they can choose from for the characters in their cartoon strip. This will probably spark them to start thinking about the plot without you prodding them to “write a story.”

You can also write a list of ideas about setting. Where will the action take place? Again, encourage the kids to come up with interesting places, like other planets, or made-up worlds. Are there talking trees? Do the characters live underground? The more possibilities, the more your writers will realize that the sky is the limit when it comes to creating a story. They are in control of what happens.

Now that they have some fodder for a cartoon strip and are hopefully excited to move on, explain that Panel 1 is the introduction and Panel 3 is the climax. For the first exercise, just have them introduce the scene and characters in Panel 1 with perhaps a hint about the problem. Next, they put the characters into a climatic scene in Panel 3 without worrying about how they got there.

Then for the surprise: another writer gets to write Panels 2 and 4! The kids trade papers. In Panel 2, the problem that led to the climax is worked on. And in Panel 4, the problem is solved, or at least, an ending is figured out.

You can switch the fun for the next exercise. First the writers come up with Panel 2 and Panel 4, and then the second writer comes up with Panels 1 and 3. It can be a challenge for the second writer, or you can allow the first writer to provide input to writer two. It’s up to you and how your kids work together.

Finally, switch from team play to letting kids start and complete their own strips. It’s okay for them to go beyond four panels, or stretch one panel into two. Do they want to create a series? Good! Talk about graphic novels. Turn them loose on the idea. Once these budding writers grasp the concept of writing comic strips, it’s fun to allow their creative energy to flow.