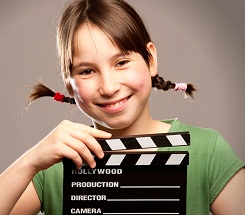 Scheduling a film as part of your lesson plan brings some welcome variety, doesn’t it? The lights in the classroom go down, and voilà! Suddenly, a kind of window opens on a story setting, an animal’s burrow, or scene from history. It can be exciting and — thanks to professionals behind the camera— a film can dramatize the information and concepts you’ve been teaching. It’s a common experience that everyone in class can build on.

The problem is, watching a film tends to be associated in students’ minds with relaxing— kicking back, like being at home. According to David Perlmutter MD, author of Power Up Your Brain: The Neuroscience of Enlightenment, the typical American child watches 1680 minutes (28 hours) of television per week.

So it’s pretty hard to break the association between passively watching a show at home, and doing the same at school, when students watch television about as much as they’re in school!

Nevertheless, showing a film related to grade-level content, objectives, and outcomes can be very worthwhile, provided you prepare to Stop the movie! and teach from it.

To start with, let’s assume that you’ve already evaluated the film and decided, yes, there are specific learning outcomes embedded in the film that you can bring out. In other words, the film pairs well with what you want to teach. OK, here are three steps for transforming film-watching from a passive experience, to one of student engagement and learning.

You might also consider going over a worksheet you assign students to complete while they watch the film, alerting them to information they should watch for. Worksheets might include:

* A story map organizer to help students identify the elements of the story, and its theme or moral;

* A Venn diagram to compare and contrast characters;

* A beginning, middle, and end chart to organize the plot;

* A list of vocabulary words to watch for: scientific, historical, literary— you name it, based on your outcomes.

This is the most important thing you can do while watching a film. For the sake of student engagement, for the sake of critical thinking and learning, it’s important to keep students in the active, not the passive mode, of watching. Using some of Bloom’s New Taxonomy (updated for the 21st century by a former student of his), stop the movie, and focus on:

* Remembering: have students recall the information they’ve just seen by identifying, defining, repeating, or listing it;

* Understanding: can students explain ideas or concepts in the film?

* Analyzing: have students identify steps in a process, compare or contrast differences in characters, or explain reasons for an event occurring;

* Evaluating: ask for opinions at this point. Is the story clear? How much is it like, or unlike the written version? How would the class have demonstrated the concept if they were doing it?

This last strategy, evaluating, is especially important for students applying what they’ve learned in the film to a new situation or experiment. To really understand what they’ve seen, students should be able to demonstrate, sketch, dramatize, or solve, using the film’s information.

The purpose of post-viewing discussion and assessment is to relate the film and its message or theme to the topic at hand, the students’ individual lives, or to their understanding of the world in general. This is an opportunity for students to reflect on what they’ve just seen, and make the information concrete by linking it to something they already know.

Films in the classroom can be wonderful assets to teaching, particularly how they add extra emphasis to concepts, engage students, and provide practice for them in aspect of critical thinking. Highly recommended is the article, “Film in the Classroom,” published on the New York Times’ website, “The Learning Network.” Some of the ideas are aimed at high schoolers, but for generating your ideas about ways film can be used in class, the article can’t be beat. http://learning.blogs.nytimes.com/teaching-topics/film-in-the-classroom/

Charles Shields taught and supervised for 20 years; he has written instructional materials ranging from workbooks, to hardbound biographies and histories for students in K-12. He’s also the author of Mockingbird: A Portrait of Harper Lee, a New York Times bestseller. He resides in Virginia with his wife, Guadalupe, a retired Chicago elementary school principal.