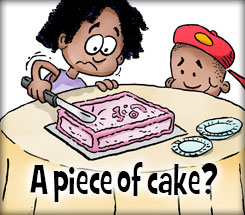 I’m about to let the cat out of the bag, which could cost an arm and a leg, but it’s a piece of cake.

Aside from my penchant for rambling, you might have noticed something strangely familiar about the last sentence. It does, in fact, make use of three idioms, which are phrases owing to their figurative (not literal) meaning. In short, I do not have a cat in a bag, I will not sacrifice any of my limbs for any reason, and the concept itself is not a chunk of baked confection.

I am, however, about to share something, which might be at great expense, but relatively simple. So why didn’t I just say that in the first place? Because to use idioms means that I’ve let you in on the joke of sorts. Idioms often reflect the habits and traditions of certain cultures and would be mysterious and unrecognizable if translated. The English language alone sports somewhere around 25,000 idiomatic expressions, with more being added every day. (Ever “burn” a DVD?)

You might think that idioms are simply made up, but most actually have a genuine basis in the history of a community. For example: If you have something up your sleeve, it means that you are hiding something or have an alternative plan. The phrase originated with 15th-century garments that lacked a lot of pockets, leaving the sleeves as the obvious places to store things that could not be hung from a belt, as in a handkerchief, a writing instrument, or perhaps the occasional timepiece (so as not to be late for tea, I guess)

Idioms are much more common than you might think, which would (insert light bulb over head–there’s a visual idiom) make for a great lesson for your students, right? Try this…

Write a few of the more popular idioms (Break a leg, Drive someone up the wall, Don’t judge a book by its cover, The pen is mightier than the sword, etc.) and ask your pupils if they understand the meanings.

Explain to your class what an idiom is, and ask them to listen for and make a note of idioms they might hear or read, whether at school, home, on TV, or in a book. Gather the examples presented, and redistribute them amongst your charges (just to mix it up a bit), this time asking them to uncover the origins of those particular phrases. Ask them to watch for things that might be considered very “American” in origin, as well as expressions that might lend themselves to a more global understanding.

You can also have them co-opt some phrases with modern descriptors, as in Don’t judge an iPad by its cover, A bird in the hand is worth two Tweets, or Curiosity killed the LOL cat.

If you’re like me, and not content with everyday learning, then kick it up a notch. Ask your students to come up with their own idioms. For starters, how about “Put that in your backpack,” or “Let’s re-boot that idea,” or “I’ll put a plus-sign behind that one.” Have them explain what their soon-to-be-phenomenal idiom means and where it comes from. Is it something relating to their individual experiences, classroom, friends, or personal activities?

There also exists a wonderful treatise on idioms and other often-flung phrases by Robert Hendrickson entitled The Facts on File Encyclopedia of Word and Phrase Origins (Checkmark Books), which serves to uncover the origins of words and utterings that we use on a daily basis, should you care to explore some more. It’s a heavy book, but provides a wide understanding of how and why we use our language in the way that we do.

Well, I’ve probably bitten off more than I can chew, so it’s time for me to hit the road and bring home the bacon. Knock on wood! (Okay, I’ll stop.)