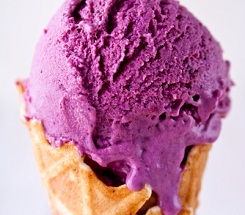 With this post, introduce your students to the fact that their favorite ice cream has something in common with the Library of Congress, which is home to the first recorded recipe for vanilla ice cream.  Coincidentally, this recipe was written by Thomas Jefferson about a treat he enjoyed in his travels to Paris, France. Jefferson also shared his culinary experiences about eating waffles made in a waffle iron, and the delicious idea of mixing macaroni and cheese. Talk with your students about how these are all food items still popular today.

Thomas Jefferson spent time in France before he became the third President, and it was there that he explored and wrote notes about the different foods that people in Europe enjoyed. He brought back a collection of recipes that included instructions for fried potatoes, rich sauces and fruit tarts.

When Jefferson, a well-established architect, returned from Europe to his home in Virginia, he redesigned the kitchen in the house to resemble the kitchens he had seen in France. Thomas Jefferson had dinner parties at his home, known as Monticello, where the décor reflected his interests in architecture and gardening. Dinner guests at Monticello were treated to meals prepared by Jefferson’s chef, who was trained in French cooking techniques. Share with your students that serving French style cooking was unusual for that time period, so people were thrilled to get an invitation!

Jefferson’s recipes can help demonstrate to your students the importance of clear writing, as Jefferson was not a cook and hence his recipes could be difficult to follow. A copy of the original recipe he wrote for ice cream can be seen here: http://www.loc.gov/exhibits/treasures/images/uc004810.jpg This recipe provides the vague instructions to use “two bottles of good cream”. There were some people who were serving ice cream in the United States before Jefferson wrote his recipe—in fact, it is documented that George Washington bought an ice cream maker in 1784.  However, Thomas Jefferson was the first to write a recipe for French vanilla ice cream in his own hand. Both Washington and Jefferson had ice houses built at their homes that allowed the kitchen staff to store food items for long stretches of time.

Wealthy people were able to have staff store chunks of ice, retrieved from frozen ponds or rivers in the winter months, in the ice houses. Since these chunks of ice were not pure forms of water, the ice could not be served in a beverage like we use ice today. The ice was used to keep meats cool for storage or to freeze items like milk, eggs, and sugar into frozen desserts. Early instructions for making ice cream called for placing the cream mixture in a bowl and placing it in a larger bowl filled with chunks of ice and salt. This is what the French called a sarbotiere.

Have your students make their own ice cream using two different size coffee cans. (Try and get vanilla beans for this recipe. They are available in the baking aisle of most supermarkets.) You can provide some toppings and have students sample their ice cream. Enjoy!

Note: The same results can be accomplished by shaking the can if space is an issue in your class.

1. Pour heavy cream and light cream, sugar, and vanilla in the 1lb. coffee can.

2. Cover with the lid and seal. Secure with duct tape.

5. Place can on its side and roll back and forth about twenty minutes.

7. Remove lid from 1 lb. can and scrape frozen cream mixture from the sides of the can.

8. If you want to add any other ingredients like cookie crumbs, nuts, or chocolate chips, stir in now, replace lid on 1 lb.can, and re-tape.

10. Roll back and forth for another ten minutes.