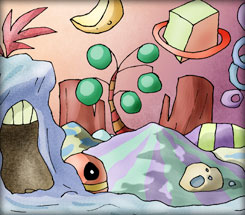 For jeeble pock and roody gam

A fortish blitz would bander;

Sound familiar? No? How about this one?

`Twas brillig, and the slithy toves

Did gyre and gimble in the wabe:

All mimsy were the borogoves,

And the mome raths outgrabe.

The latter of these two poems you should recognize as Lewis Carroll’s Jabberwocky; a seminal if nonsensical piece of prose to be found within his novel Through the Looking-Glass, and What Alice Found There, which was a sequel to Alice’s Adventures in Wonderland. The former? Ummm, not so much. I just made it up. And do either mean anything? Highly doubtful.

Rather than wanting to take the world of poetry by storm, they are merely exercises in rhythm, meter, and syllabic stresses. To be clear, a jabberwockish (not a word) poem uses both real and made-up words for the effect. In essence, when a real word won’t do, make one up that will.

Made-up words also had a place in the music of the early 20th century. Lyricist Ira Gershwin would have his brother George write the melody to a song first, and then he would use “dummy” lyrics to temporarily hold a place in the music until he could come up with the right words. The idea being that the music and it’s rhythm was the most important item on the page, and that it was easier to find words that fit the music, versus the other way around.

Have you ever considered using the Jabberwocky approach to writing in the classroom? It’s easy enough to launch a real study of Lewis Carroll’s work, with examinations of words and parts of speech, the history of it, and so on. But come on, that is B-O-R-I-N-G! Instead of going down the tried-and-true path, why not kick it up a notch?

Your students should have a basic grasp of nouns, verbs, and all that, correct? Have them identify the parts of speech in the poem. Then ask them to identify the words that are made up and why they believe them to be nonsensical. While you’re at this phase of the examination, ask the kids why they think Carroll used a particular word. Does it sound like a similar word, and what would that word be? Is it meant to be meaningful or just expressive? Is the word constructed of two or more other words?

FYI for your students: Mr. Carroll made excellent use of onomatopoeia (using words that imitate the sounds associated with that word; Bang!, Boom!, Hiss… and so on), and portmanteaus (blending two or more words to denote a new word, as in fog+smoke=smog) to give meaning to the words.

Now, consider ending your study of Jabberwocky with a test. No, not that kind. (You’re out for that Teacher of the Year Award, right?) Have your students write their own version of a nonsense poem, employing most of the techniques you’ve discussed. Ask them to recite their poems to the rest of the class, and open things up for discussion. “Why did you use a certain word?” “Does it really have a meaning?” “Is it a combination of other words, a word that sports a particular sound, or did you just totally make it up?” Give extra credit for poems that make good use of rhythm, meter, rhyming, and/or stress.

Just for the fun of it, the Muppets produced their own version of Jabberwocky, which your charges might find quite entertaining as well. It can be seen here on YouTube.

And if you don’t believe that poetry and creative writing hold a special place in the lives of most children, consider this: The opening stanza of my nonsense poem was something I penned in the 7th grade, and I’ve not seen it since. But I do remember it…