Science in the Backyard: Food Webs 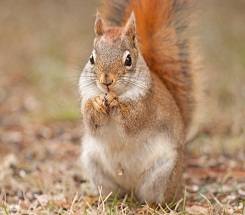 Wherever you make your home, the drama of eat-or-be-eaten occurs all around you every day. The study of who eats who (and other ways living things are related) is called ecology. A great way to introduce kids to this discipline is to help them understand the backyard food web.

The concept of a food web was first introduced in Charles Elton’s 1927 book Animal Ecology (he called “food webs” “food cycles”). A food web is essentially a visual representation of who eats who in a given habitat, but in more technical terms, it charts the flow of energy from one set of organisms to another. A brief overview of the players and the transfer of energy follow:

Primary producers—in a word, plants. Plants are the base of almost all food webs on earth. They take inorganic compounds and the sun’s energy and turn them into bio-mass (i.e., leaves, seeds, fruit, etc.).

Primary consumers—Animals that consume only plants are the primary consumers (the herbivores). There are an awful lot of them—after all, they are second only to plants in the number of species that are supported by their existence (think rodents, insects, etc.).

Tertiary consumers—this is a fancy term for the top of the heap. These animals are either omnivores (like us) or carnivores (like lions), but generally are not prey for other animals. This group contains the fewest number of species and requires the most energy from the system to survive.

Decomposers—all living things are eventually food for the decomposers (that’s right, even the tertiary consumers get eaten in the end). They keep energy cycling back into the web.

Now for the Fun Stuff!

The best way for students of all ages to acquire and retain information about food webs is to help them create a visual representation. Two possibilities follow—Activity 1 works best with a good-sized group. Activity 2 is appropriate for individuals.

For either activity, you will need a list of plants and animals commonly found in the backyard habitat. It is not necessary to have a comprehensive list—a few items from each group described above will do nicely.

You will need:    A metal ring for each participant
(if you can’t get rings, anything the students can tie their yarn to will work)

Assign each student a specific role in the food web. For example, one student might be a dandelion, the second a caterpillar, the third a garter snake, and so on. You can write the role on a name tag, or you can get a little fancier and have a photo of the role for each player to pin on their shirts.

Give each student a ring and 6 pieces of yarn. Have them tie all their yarn pieces to the ring. Now everyone is ready to begin. Each student should find someone who represents a food source for their creature and attach the other end of a piece of their yarn to that person’s ring. Have them repeat until all possible connections are made.

You will end up with a jumble of yarn and laughter, but also with a powerful visual on the interconnectedness of nature. With preschool and early elementary children, it is enough to leave the exercise right there. However, with older students you can have some very insightful discussions about what would happen to the web if certain elements were removed. You can demonstrate this principle by cutting yarn and removing a participant from the web and then talking about whom else is affected by this action.

You will need:    A poster board for each student

Yarn and/or markers (to create the connections)

Have each student glue their creatures to the poster board. You can have students place each plant/animal in their appropriate group (see definitions above) or kids can arrange them any way they like. Use yarn or draw lines to connect each living thing in the web with the things it eats and the creatures that eat it. Students can also label the plants and animals and identify what group they are in (i.e., primary producers, primary consumers, etc.).

My kids and I made food web posters when the kids were 3 years old (they are 10 now). Their giant posters with jaggedly cut photos and colorful lines were proudly displayed for months afterwards. When my son heard of my topic for this post, he ran to fetch his poster. It’s a little battered and faded, but the memory we created obviously sticks with him to this day. More importantly, he understands a little about how the natural world works and the impact each living thing has on the whole. And that is a memory that will serve him well for a lifetime.

* You can take your own photos or print them off the web. The US Fish & Wildlife Service has a digital library of public domain photos available for downloading and printing at: http://digitalmedia.fws.gov/