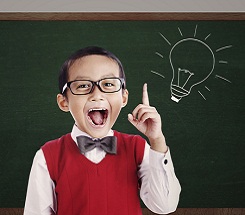 Kids can be amazingly innovative if left to their own creative devices. Cardboard tubes, tape, scissors, and a couple of mirrors make a pretty cool periscope. But what about the kids who take those same materials and create something that is both unique and useful, like a better mousetrap? You might have an inventor in your class. And given a little encouragement, some supplies, and a few ideas to get started, you might find yourself with a class full of young Thomas Edisons! To note, Thomas Edison, the Father of Inventions, had over 1,000 U.S. patents.

A utility patent awarded by the U.S. government grants an inventor the sole right to make, use, and offer for sale their invention. The patent process might seem daunting to us adults, which is why most people hire a patent attorney, but a utility patent is really all about just three simple questions that kids can answer:

– Is the invention original and unique? In other words, is there something about the invention that is new and has never been done before? (It’s usually okay if the invention makes use of current inventions in order to function as long as it does something beyond what the existing inventions do)

– Is it not obvious, that is, did the invention require some clever innovation that not just anyone would easily stumble upon?

– Does it serve a need, such as being an improvement of an existing invention?

If the answer to all three questions is yes, then the invention might be patentable!

The main component in the patent process is, of course, the invention. It’s up to you if you want your students to actually invent something or just have them write a patent for an existing invention. Introducing some history about patents would be a fun start to this project.

If you choose to let the inventors have at it, make sure they understand that nobody has to invent a microwave or a space shuttle. Patents have been granted for things like slotted spoons and lots of mousetraps! You might present a problem that could use a new, improved solution, such as reaching something from a tall shelf or storing recyclables. You can come up with a list of ideas and let the kids choose a challenge, i.e. stool, watering can, cat or dog toy, game, app, energy saving device, fly swatter or even a paper clip. Or you might ask them, “What chore do you think takes too long or requires too much work? How would you make it faster and/or easier?” An invention can be an individual or team project, or even an entire class endeavor. If your school has a Science Fair, this is a great tie-in.

As the students consider inventive ideas, make sure they keep in mind those three questions. Has it been done before? If so, how does it improve on what’s already been invented? What competition does their invention have and why is it a better choice for the task? Could anyone have easily thought of it? And here’s another one: does it save money or help the environment? A good invention is something that lots of people are going to want to use.

An actual prototype is not always possible, but usually a cardboard model will work to demonstrate the workings of the invention. If it’s a very complicated mechanism, drawings that show the invention in action are good. Not all inventors are terrific artists, so this might be a good time to let the students form teams.

The next step is writing the patent. The patent consists of three main parts:

– Description (called the specification). Describe in great detail the history of the invention, why it’s so cool, and exactly how the invention works. Don’t leave out any steps. Mention other inventions that might be used to make it work.

– Diagrams. Detailed drawings should be labeled and those labels referred to in the description.

– The Claim. This is the most important part of the patent application. It defines the protection that will be granted by the patent. A claim is supposed to be written as one sentence, but it is okay for a claim to be an extremely long sentence (an excellent exercise for your future attorneys). The trick is to make the claim as general as possible, so that the patent can be applied in all kinds of situations. A fun example is the ballpoint pen. A printable version is here:

You can be as loose or strict about these steps as you like, but the idea is for the invention to be depicted so that anyone can understand how it works, what it does, and why is it unique and useful. A live demonstration is also allowed (the author of this article presented a video as part of her patent application) but the three components of the patent should be completed.

The students/teams can present their patent before a “patent examiner” to see if it passes all the tests. The real patent process can drag on for years, with the inventor being sent back to the drawing board before their patent is finally granted. And there are fees involved, but we won’t worry about that here!

Students might also enjoy researching the history of a patent on something that they find interesting. For example, contrary to what most think, the light bulb was not invented by Thomas Edison. He patented an improved version about 50 years later. The modern-day LED has a fascinating patent history, too.

In more recent news, Apple is fighting and filing lawsuits over all kinds of innovations that the company patented. The “pinch to zoom” on a touch screen device, a patent so famous it’s referred to as “the Steve Jobs,” was recently declared invalid! The patent world is a fascinating place for any potential inventor, or for that matter, attorney. By writing their own patent, students can get a feel for what it’s like to invent something that even in a small way could change the world.