Twenty Thousand Emmas Under the Sea 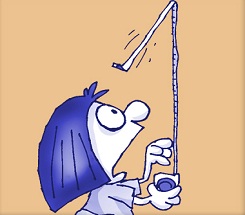 How large is your classroom? Just for the sake of something to share, let’s say it’s 20 feet by 24 feet. A little math gives you square footage of 480 feet. If you consider that the ceilings are 10 feet high, then you would have 4,800 cubic feet. Are you with me so far? Good. So let me ask you, how many cubic Jacobs is that?

What is a Jacob? The question should be “Who is Jacob?” And if Jacob happens to be the name of one of your students, then you’re in luck. If you don’t happen to have someone with that moniker that shows up every morning for class, not to worry. Just choose someone else. Ben, Amanda, Sam, Tyshawn, Adriana. It really doesn’t matter, because you should be more concerned with their height than their name.

Measurements are relative. Relative to whatever standard we set and agree upon, whether it’s a meter, a foot, a mile, a calorie, a BTU, a Celsius or a Fahrenheit. And if you consider your classroom a community all in its own, then you can set whatever standard for measuring that you want. So here’s a bit of a fun project when it comes to such things:

Choose your mark (I mean pupil. Sorry, I just finished watching The Sting). We’ll call him Mark. Measure Mark’s height (you’ll need it later), then with the help of other students–along with the loss of Mark’s dignity–lay him along the floor several times until you can determine how many Marks wide your classroom is. Repeat for the width, having your students take note. Use rough metrics to determine fractions of Mark (as in the width being 5.2 Marks), or use masking tape to divide Mark into 10 equal segments.

Hoisting Mark up towards the ceiling will of course be problematic and likely against your school district’s policy of using students to measure the height of classrooms, so a tape measure (and Mark’s actual height) will suffice in this instance. Ask your students to do the math, and determine the square Markage of your room, as well as the cubic Markage of the space. And don’t relegate Mark’s new found status to the classroom. How many Marks to the next nearest city? How many Marks to the moon? How many Marks can light travel in one second?

This exercise can lead to a great discussion with your students about the differences between metric and standard units of measure, a common point of contention between architects who have projects in Berlin and New York, for instance. If you want to toss a bit of a puzzle their way as well, ask them “What is the problem with the phrase three point five feet?” The answer of course, being that it’s a mashup of standard and metric units of measure. You can also point out that the United States is the only industrialized country in the world that does not use the metric system, and that even though Great Britain employs the metric system, the older Imperial system creeps back in every now and then. Confusing? You bet!

It would also be good time to point out how critical it is that we have a system we can agree upon. In September of 1999, the Mars Climate Orbiter went into a low-altitude orbit above the planet and was ripped apart by the atmosphere. Engineers (subcontracted) at Lockheed-Martin chose to use the English standard measure rather than the agency’s preferred metric system. Oopsy!

And should you choose to plot how many Emmas it would take for Jules Verne’s legendary tale of undersea adventure, consider that a league is a rarely used measurement equating to roughly 5.6 kilometers. (A league was once considered the distance a person or horse could walk in an hour. Sounds a bit vague, eh?) At any rate, it’s going to be a lot more Emmas than twenty thousand. Where’s my calculator?