About 10 years ago I was quite fortunate to learn how to prepare and serve a dish called “Long Island Brussel Sprouts,” a colorful and extremely flavorful near-relative of something my mom used to refer to as being “good for me.” With all due respect, my mother’s recipe used the same vegetable, but the similarities fall off quickly after that.

Hers was a smelly, greenish gray group of boiled mini-cabbages that only existed to fortify the bloodstream of children gathered around the dinner table. Mine on the other hand features the tiny vegetables in a quickly seared, wonderfully odoriferous and extremely colorful cacophony of bacon, carrots, garlic, and pine nuts, topped with fresh parsley.

I’m not mentioning the culinary differences here to dis mom’s cooking; it was simply the way she learned to cook brussel sprouts. Rather, it’s tale of contributions. The first time I brought this recipe to my extended family’s Thanksgiving stove top, there were more turned up noses and skeptical looks than platform shoes at an 80’s hair band reunion. But those noses and looks were quickly squelched when the tasting began. (Reminder to self: stuff a few of these delights in your pocket while you’re cooking them, because there are rarely any left by the time you can make it through the line.)

Similarly, the first Thanksgiving in 1621 was all about whatever one could “bring to the table,” with many accounts citing the likely presence of corn, duck, venison, oysters, cabbage, onions, and squash… with pilgrims and native Americans both offering what they could. (NFL games, mashed potatoes, and cranberry sauce would not come along until a few years later.) 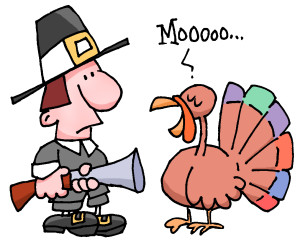 Contributions to the Thanksgiving feast need not always be of the culinary kind. It is the task of one of my younger nephews to bring three really good jokes to the table, to be dispersed at random moments. Another has the talent of being a really good dishwasher (a skill sorely needed after such a feast). With the knowledge that contributions can come in many guises, let’s take a look at a Thanksgiving-related activity for your students that may uncover a wealth of different kinds of sharing.

Ask your students to write and draw something that they could bring to a Thanksgiving dinner. And though it’s a bit cliche these days, encourage them to “think outside the box.” Here are a few ideas to get them going:

Your students can illustrate, write, clip images from magazines, or whatever helps them present their contributions. Ask them to be ready to explain their choices, and to share them with the rest of the class. Motivate them to build upon the ideas of others, and be sure to share your own ideas or stories of Thanksgiving.

There is a lot to be learned from the story of a simple feast shared with friends and family. However you approach your project, be sure that everyone’s gift is discussed and considered. With the exception of boiled brussel sprouts. (Sorry Mom.)