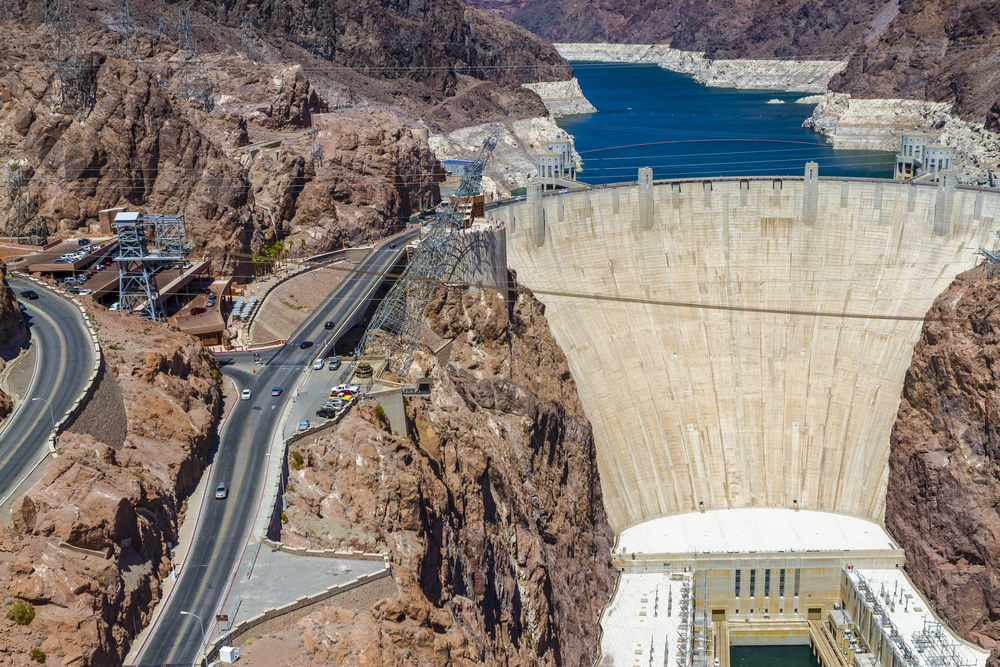 The Hoover Dam, located on the border between Arizona and Nevada, was built between 1931 and 1936.

Hydroelectric power, also called hydropower, is the process of using the energy of moving water to create electricity. The water cycle and gravity come into play when it comes to moving water, so teachers can tie this article to those studies.

People have harnessed the energy from water for thousands of years. For example, we know that more than 2,000 years ago, people used water wheels to grind corn and wheat. Tidal water and river water were both used to power water wheels, which were connected to other wheels and gears to power millstones and sawmills. It was in the mid-1770s when a French engineer named Bernard Forest de Bélidor described the first modern turbine. The turbine pretty much took the place of the water wheel and was eventually involved in almost every kind of electrical power.

The new invention inspired engineers to come up with a plan to create a lot more energy from water using water turbines. The theory was to build a dam on a large river, one that has a large drop in elevation. The dam stores water in a reservoir behind it. There is a water intake close to the bottom of the dam that leads to a penstock, which is a channel for conveying water. Gravity causes the water to drop down the penstock where it heads through a turbine propeller. The turbine is turned by the moving water, causing it to produce mechanical energy, just as the water wheel did. The mechanical energy in this case is kinetic energy (the energy of motion). That energy goes into a generator, where it is converted into electricity. Power lines carry the electricity to where it is needed. The plan worked. Hydroelectric power systems at dams could soon generate enough electricity to power factories, communities, cities, and eventually, entire regions.

It’s pretty easy to see the *pros* when it comes to hydropower:

There also some *cons* when it comes to hydropower:

Many of the negative impacts of hydropower center on what the damming of rivers does to the native plants and animals in the waterways that are affected. For instance, sediments build up behind dams, triggering oxygen-starved zones that can’t support river life. Water temperature changes can also make survival difficult. Riparian channels and estuaries are also negatively affected.

One problem of major concern is the survival and passage of migratory native fish. Fish ladders have been installed next to dams and their designs have been improved over the years to make it somewhat easier for fish to migrate upstream where they will spawn. But the populations of native fish in the Pacific Northwest and other areas have drastically declined since rivers were dammed up to manufacture electricity.

Political pressure is building in some areas to give stronger consideration to the impact hydroelectric dams have on the ecosystem. Hundreds of hydroelectric dams have been removed in recent years, including the Elwha River project in Washington. It was determined that the small amount of energy these dams produced was not worth the damage being done to the environment.

How does hydropower work? Build a small waterwheel!

There are lots of designs for a simple waterwheel out there, most using cardboard, straws, and paper cups.

Here’s a video showing a water wheel built from a pie tin and “other easy to find parts.”

Here’s a more sophisticated design along with a nice lesson plan from the Maine Energy Education Curriculum: