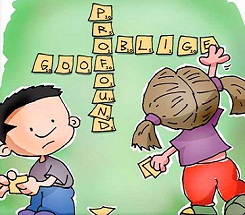 My wife and I love to play Scrabble®. There is no throwing of tiles and shaking the dictionary tauntingly in the other’s face, but I can usually take her. Though not all the time. Occasionally she will trump my etymological effluence with a triple word score that defies explanation and luck… in the physical world anyway.

We also play online via Facebook. It’s just one of the many ways we communicate; her at an office job, me sitting at my desk at home writing nonsense blogs. If I see that she has not played for several hours, it’s a sure sign to me that she is having “one of those days” and that I had better think about preparing something good for dinner. In turn, if my plays are absent for some time, she knows that I have been distracted by some project in the garage that was calling my name.

We also agree to cheat. With the profusion of Scrabble word helpers online, it’s unthinkable not to. And it’s not cheating if we both cheat (I think that’s a quote from Socrates). So occasionally, words like wirra (to express grief) or medaka (a type of Japanese fish) will surface, much to the delight of the player and the woe of the playee.

For all its online underhandedness (there’s a word for you), the process of “hunting” words online has actually expanded our collective vocabularies. We can almost play the “real world” version without so much as looking at a dictionary. Almost.

So, have you ever considered bringing the subtle educational nuances of Scrabble into your classroom? I understand that it’s a two person game, but there are ways of breaking out of that rule, as well as methods that prevent the little wooden tiles from becoming lost, eaten, or otherwise missing. It’s a game I call Wall-Nut Words. Here’s how it works:

Pick up (or steal from the principal’s office) a couple of packs of Post-It notes. I like the super sticky kind as they will survive more than one application via small sugar-and-saliva coated fingers. While you’re Watergating the chief’s office, grab a black marker as well. Then find a wall (you can do this…).

Mark the Post-It notes as follows (letter, how many needed, and points):

Choose two teams. Take all of the letters and turn them upside down on a table, then let each team pick seven. Flip a coin to see who starts first, then let the teams start to build their words on the wall Scrabble style, always playing off of another letter. Be sure to count all the letters used in the word, not just the new ones, and always draw up to seven letters if not all are used in the previous word. Award a team 50 extra points if they can use all seven letters in one round. The team with the most points wins, and allows the other team to start first next time.

Something I personally find interesting in this game is that when teams are chosen (if you leave it up to the kids), a complete reversal of the time-honored playground method of picking teammates is suddenly vanquished. Muscles are of no use here, unless you allow for the thalamus, hypothalamus, amygdala, and hippocampus.

Hmmm. Gotta go! I just thought of a great Scrabble word. (She’s gonna hate this one…). 🙂

Here’s a bit of Brain Candy as well: In the 1930s, Alfred Butts (real name) took his passion for crosswords and anagrams, and created a game he called Criss Cross Words as a personal pastime for family and friends. Game manufacturers of the time refused to market and produce his unique game, but in 1948 James Brunot and his wife (both avid Criss Cross Words players) felt they could make it work. After several years of marketing and producing the game from a small shop in Dodgingtown, Connecticut, the Brunots began to realize their fortune in 1952, when orders began pouring in for the game. Today, Scrabble is owned by Hasbro, Inc. and ranks as the second best-selling game in America, just below Monopoly!